Bitcoin’s drop to $30k has sparked a chain of events in the past 7 days, with Terraform tokens taking the biggest hit.

Saylor Says Microstrategy Will Not Sell Bitcoin Amidst Dip

This Tuesday, MicroStrategy CEO Michael Saylor attempted to clarify the firm's stance regarding its Bitcoin-backed loans. Phong Le, MicroStrategy's CFO, suggested a margin call if BTC fell below $21,000 a few days ago. The sharp drop in the price of Bitcoin to $30,000 on Monday prompted the statement, which understandably caused some panic among investors.

However, the Bitcoin proponent is calling for some calm. According to Saylor, his company has a $205 million “term loan” and is required to keep only $410 million in collateral. Last month in April, Microstrategy purchased an additional 4,167 BTC worth approximately $190.5 million. The funds used for the purchase came from a $205 million term loan from Silvergate Bank. 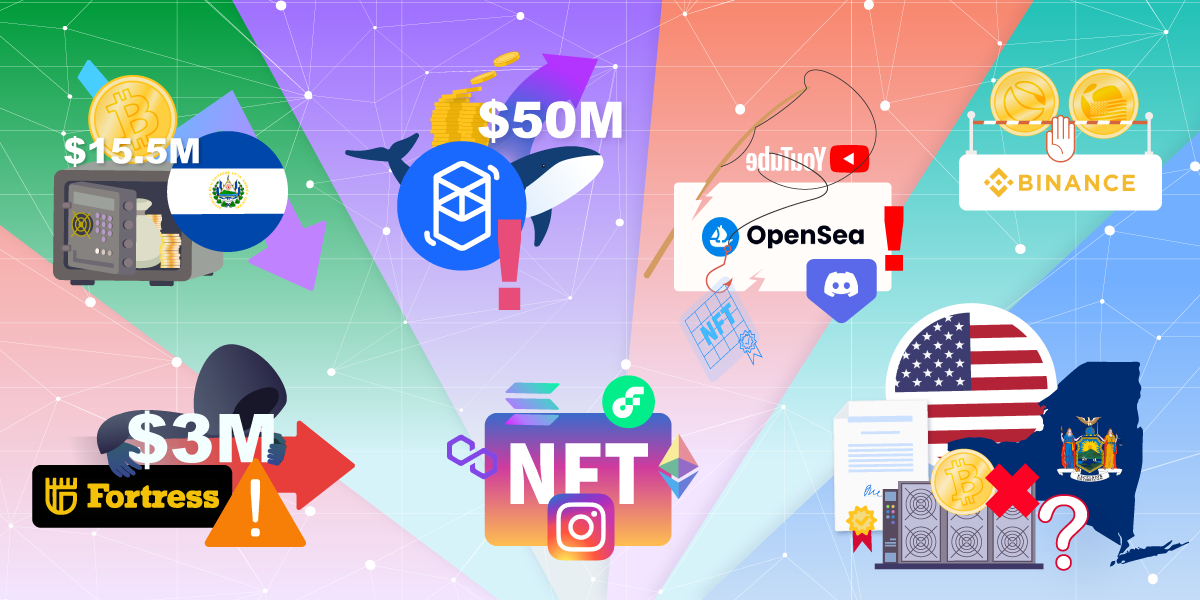 Despite the seeming debt, Saylor reiterated that the business intelligence firm still has 115,109 BTC it can pledge.

Additionally, the CEO suggested that Bitcoin must fall to $3,562 before the company runs out of crypto to pledge. As a matter of fact, if the impossible occurs, Saylor is certain the firm will weather through. According to the founder and CEO, Microstrategy has planned for every possible scenario involving the volatility of the largest cryptocurrency. Finally, the CEO promised that even a significant drop in the price of Bitcoin would not cause the firm to sell its BTC holdings for a long time.

New York to Prohibit the Establishment of Bitcoin Mining Business

According to a proposal released on Friday, New York State intends to prohibit future Bitcoin mining operations. The bill proposes a two-year moratorium on some mining activities that validate blockchain transactions using the proof-of-work (PoW) system. To operate, the PoW mining system necessitates high-tech equipment that consumes a significant amount of electrical energy and fossil fuels.

So far, the bill is moving quickly through the state capitol in Albany. The bill's supporters claim that they want to crack down on Bitcoin mining in order to reduce the country's carbon footprint. According to the bill, unless a PoW mining company uses 100% renewable energy, it will be unable to expand in the state. In similar fashion, permit renewals will be prohibited, and new mining companies will be unable to operate.

According to some industry experts, if the move is implemented, the United States may experience a chain reaction. Investment in more sustainable energy sources will be suppressed under this scenario. The experts also stated that the mining facilities benefit lots of local engineers, electricians, and engineers. As a result, they believe that tax dollars and jobs could flow out of the United States.

Last Tuesday, a Fantom whale took out a huge loan nearly bringing down the high-performance Fantom network. To obtain a loan, the individual, alias Roosh, deposited 59 million FTM tokens on Scream, a DeFi platform. He used the loan worth $50 million to purchase two more tokens, SOLID and DEUS. Afterward, the user received the two tokens and locked them in a four-year staking contract. Subsequently, the market volatility lowered FTM's value, bringing it dangerously close to liquidation on the Scream platform.

However, a member of the Deus Finance DAO lent Roosh $2 million to prevent liquidation. The liquidation's impact would have been disastrous for the entire Fantom network if not for the timely intervention. Despite the assistance, there was a partial liquidation of 11 million FTM, causing the price of FTM to plummet. Next, a second and third liquidation occurred, lowering the FTM's price to $0.76. As a result, Roosh was left with only 35 million FTM as collateral.

The incident, despite Fantom surviving the scare, showed just how much innocuous activities like borrowing can be disastrous when done on a massive scale.

On Friday, scammers hacked the discord server of the popular NFT marketplace OpenSea. The hackers then used a phishing message that directed users to a bogus YouTube website.

Also, the exploiters attempted to gain access to the users of cryptocurrency wallets. The incident was first reported on Twitter by a sentinel software developer, Serpent. Evidence from Serpent and OpenSea users suggests that the hackers directed users to youtubenft.art to advertise a fake pass. The victims allegedly thought they were connecting their crypto wallet to buy an NFT from a new YouTube project.

Curiously, the webpage appears to have been deleted. A few hours after the account was hijacked, Opensea's support team declared a warning. The team soon followed up with an announcement that the Discord hack was being investigated. They advised users to avoid clicking random links in their discord and promised to share updates as the investigation progressed.

El Salvador's president Nayib Bukele recently announced the addition of 500 Bitcoins to the country's balance sheet on Monday. Bukele, a Bitcoin advocate, is known for purchasing Bitcoin at critical market times. President Bukele added that the coins were purchased for an average of $30,744 worth more than $15 million. Despite the current bearish sentiments in the cryptocurrency market, the BTC supporter continues to hold the cryptocurrency in high regard. The transaction represents the country's largest BTC purchase since adding the cryptocurrency to its balance sheet in September.

Furthermore, the Central American country's move is a huge boon to the cryptocurrency community as a whole. According to a report, the nation now has a total of about 2,301 Bitcoin in its reserve valued at $71.7 million.

On Monday, Fortress Protocol, a decentralized marketplace, confirmed a $3 million loss due to an attack on its platform. This adds the project to the list of DeFi hack series. DeFi hacks are becoming more common, with over $1.6 billion exploited this year alone.

Fortress tweeted that assets comprising 1,048 ETH and 400,000 DAI were first bridged to Ethereum. Afterward, the funds were deposited into popular privacy protocol Tornado Cash to escape getting traced. Numerous crypto exploiters have utilized the same privacy protocol over the past few months. Last month, stablecoin protocol BeanStalk experienced a similar attack which led to a loss of over $70 million.

Instagram to Support NFTs from the Likes of Ethereum and Solana

Meta-owned Instagram announced on Tuesday that certain NFTs will soon be available on the popular social media site.

The pilot, which will begin on Monday, will include a limited number of NFT enthusiasts from the United States. Meta, formerly Facebook, intends to connect blockchain networks Ethereum, Solana, Polygon, and Flow, as well as popular crypto wallets such as MetaMask.

The social media company stated that users will also be able to display their collections on their profiles, as well as tag the NFT developers. On the positive side, a report claims that Instagram will not charge users for uploading and sharing NFTs, unlike Twitter’s premium service.

Since Instagram has over a billion monthly active users, the new development could usher in a slew of fresh NFT collectors and creators. Meta says Facebook is next in line for this feature as it prepares for an AR-centric future.

On Monday, Terraform’s stablecoin UST lost a good chunk of its value, dropping to $0.7 from an original pegged value of $1. The stablecoin continued its fall on Tuesday, with Terra’s LUNA spiralling along with it.

As a result, Binance briefly halted withdrawals of both Terraform tokens, LUNA and UST on Tuesday. The cause for the suspension, according to the leading crypto exchange, was a significant volume of pending withdrawal operations. It further added that the slowness and congestion of Terra's network resulted in the transaction issue.

In similar fashion, exchanges such as Kraken and CoinList followed Binance's lead and suspended withdrawals at the same moment.

Despite Binance's resumption of the token’s withdrawals some hours after the prior announcement, the tokens continued to tank. At present, LUNA has lost more than 90% of its value in the past 24 hours, trading at $2.2. UST similarly trades at a dismal $0.48, less than half of its supposed value.