Bitcoin is a digital coin based on blockchain and peer-to-peer validation. It was the first cryptographic currency on the market, paving the way for other coins and setting rules for a whole new industry. No person or entity controls Bitcoin: it is a completely decentralized and autonomous network.

Bitcoin is a digital coin based on blockchain and peer-to-peer validation. It was the first cryptographic currency on the market, paving the way for other coins and setting rules for a whole new industry. No person or entity controls Bitcoin: it is a completely decentralized and autonomous network.

Bitcoin can be used to pay for goods and services online, and also as an investment tool or a store of value. Bitcoin holders spend crypto just like fiat money, the only difference is that BTC is much less susceptible to fraud: it’s decentralized nature makes it virtually impossible for someone to tamper with transactions.

The crypto community attributes the invention of Bitcoin to Satoshi Nakamoto, a person or a group of people that first published the Bitcoin white paper in 2008. A document under the name of “Bitcoin: A Peer-to-Peer Electronic Cash System” was shared on a cryptography mailing list and described fundamental operating principles of a blockchain-based cryptocurrency.

It was not until January 3, 2009 that the Bitcoin’s genesis block was mined, accompanied by a 50 BTC reward. By that time, bitcoin.org domain name had already been quietly registered by an unknown party and the coin’s beta testing period was in progress. The first Bitcoin transaction occurred on January 12, making Satoshi Nakamoto and Hal Finney the first Bitcoin sender and recipient.

Funnily enough, the first ever online purchase made with Bitcoin were two normal-sized Papa John's pizzas. They cost a certain Laszlo guy 10,000 BTC, around $25 at the time. Who knew that what sounds like an urban legend will get things rolling for a multimillion-dollar industry! Only half a year later Bitcoin market capitalization reached $1 million and the BTC value started its glorious ascent.

In 2013-2014, the early symptoms of the Bitcoin fever started to show. Crypto began to make frequent appearances in traditional media, online exchanges and various crypto platforms popped up all over, and other digital coins appeared on the market. However, Bitcoin remained the prima donna of the crypto world – the most reliable, popular, and trustworthy of all coins. The Rise and Rise of Bitcoin, the first documentary on crypto premiered, and even a song about crypto, Ode to Satoshi, was released.

Bitcoin's popularity kept steadily growing over the years, along with its value and technological complexity. In 2017, BTC price skyrocketed and peaked at $20,089 on December 17, 2017. By 2018, Bitcoin was the world’s next big thing in finances, tantalizing investors of every continent.

Early in 2018, crypto markets collapsed and the Bitcoin price (as well as the prices of most altcoins) plummeted. After a series of ups and downs BTC value dropped threefold, then remained utterly volatile for several months. With 2020 came the global pandemic and even more instability on the markets; however, BTC grew strong and returned to its top value by the end of the year. In February 2021, Bitcoin renewed its all-time high, reaching a staggering $51,630.86.

Bitcoin introduced blockchain technology to the world of finance: it runs on a distributed ledger with no central authority and a transparent record of transactions. Bitcoin’s blockchain consists of units, or blocks, that form an orderly chain, unbreakable and append-only. Every Bitcoin transaction is recorded into those blocks, the newest transactions – to the latest block. When a block is formed, it gets added up to the chain, and there is no feasible way of altering the order of the stacked up blocks.

The Bitcoin blockchain works on a Proof of Work consensus algorithm. The network consists of validator nodes that verify transactions, and each of them stores a complete ledger of all Bitcoin transactions, transparent and accessible for all users. The identity of the parties involved remains concealed as Bitcoin transactions are anonymous by nature and reflect only users’ public address (a multi-digital code).

The process of solving complicated mathematical equations in order to validate a block of transactions is called mining. Miners are rewarded for transaction verification with Bitcoin; currently, there is a 6.25 BTC reward per every block mined. Once every four years (or every 210 000 blocks) this amount is cut in half. This event is known as the Bitcoin halving and was designed to control the inflation and the value of BTC. Miners won’t be able to mine Bitcoin indefinitely: the blockchain will only ever issue a total supply of 21 million BTC.

Bitcoin is designed around the idea of using cryptography to control the creation and transfer of money, rather than relying on central authorities. Decentralization is the key to understanding why Bitcoin (and crypto in general) is different from traditional currencies.

Storing, Using, and Investing in Bitcoin

Being the most widespread digital currency, Bitcoin can be stored on any crypto multiwallet and traded on all major online crypto exchanges. You can buy Bitcoin on numerous instant swap platforms, DEXs, or via Bitcoin ATMs. As of 2021, there are plenty of online stores, platforms, projects, and businesses that accept Bitcoin as means of payment, but it is still not quite ubiquitous.

Many crypto enthusiasts use Bitcoin as an investment instrument. Indeed, investing in Bitcoin is not much different from investing in the stock market. Unfortunately, there is still not enough legal framework for operations with Bitcoin; only a handful of countries have coherent legislation when it comes to Bitcoin (and crypto in general). 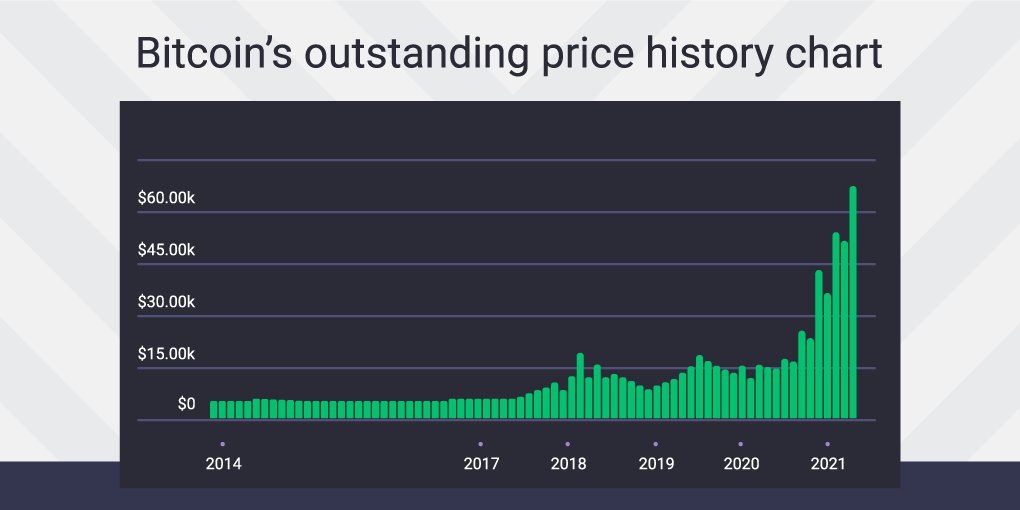 Bitcoin has several qualities that differentiate it from any form of money that went before it. With its issuance strictly limited by the protocol itself, BTC is scarcer than other assets, commodities, or currencies. This scarcity has given rise to Bitcoin being described as a form of ‘digital gold’.

In their reasoning, institutions and corporations buying BTC last year often cited fears over depreciating fiat currencies in the wake of the global pandemic. With governments spending like never before, central banks were forced to print money en masse. Set against fiat’s inherent lack of scarcity, the appeal of Bitcoin’s finite supply grew.

MicroStrategy CEO Michael Saylor has been a particularly vocal proponent of the ‘gold 2.0’ take. After investing more than $1 billion of company money in BTC, his company put on an online event called ‘Bitcoin for Corporations’ in February 2021.

MicroStrategy remains one of the leading companies to integrate  Bitcoin into its company’s expansion policies. After its sizable investment in February 2021, May and June saw MicroStrategy secure another investment of more than $15 million, with promises of more strategic plans to raise  the company’s stake in Bitcoin above $2 billion.

The company’s intentional resolve to make Bitcoin investment a significant factor to its growth make MicroStrategy arguably the most influential institution  as regards Bitcoin market and price movement.

The same might be said of Tesla, perhaps in less flattering terms, after the electric vehicle company rescinded an initial decision to accept Bitcoin as payment for its products.

Despite Tesla’s cautious approach with Bitcoin, it remains one of BTC’s biggest proponents and institutional backers, especially considering its investment of $1.5 billion into Bitcoin in the same February 2021.

With governments expected to continue to spend heavily, MicroStrategy, Tesla, and other major BTC buyers seem a likely source of inspiration for additional companies and financial institutions. Many industry observers expect others to hedge their cash reserves by holding BTC in the future.

Bitcoin is also increasingly appealing to several nation states. Countries that are subject to economic sanctions, such as North Korea, Iran, and Venezuela, have already started experimenting with BTC and other cryptocurrencies. Meanwhile, countries like El Savador and the Bahamas have taken extra steps to make cryptocurrencies a legal tender.

National adoption of digital currencies has been slow and highly speculative, which is understandable. Governments’ attitude towards cryptocurrencies, and that of central banks across the world, have changed over the years, morphing into new shapes in response to the startling growth of the crypto industry. What started as dismissive, evolved into a growing alarm and wariness of the performing crypto industry, before degenerating into warnings and bans, until many banks realized digital currencies were inevitable.

Different banks and governments are now interested in harnessing the obvious potential of the crypto industry, albeit with different methods, from experimenting with the creation of their own digital currencies (CBDCs), to even facilitating a conducive environment for the crypto industry.

For example, the Iranian government issued more than 1,000 licenses to digital currency miners in early 2021. In fact, its legislation demands that miners sell their BTC directly to the country’s central bank. Similarly, power plants in the nation are permitted to mine Bitcoin.

Likewise, Venezuela legalized mining in 2020, provided it remains under government control. The troubled South American nation is also known to be financing imports from both Iran and Turkey using BTC.

However, it’s not just rogue nations that stand to benefit from Bitcoin adoption.  In June 2021, El Salvador became the first nation to adopt Bitcoin as a legal tender, and the third country to have a digital currency as a legal tender, only after Venezuela and the Bahamas. In 2018, the Bahamas issued its own crypto token called the Sand Dollar, which is still very well in circulation on the island.

Like El Salvador seeks to prove, many experts make the case that Bitcoin could serve as a better reserve and global settlement currency than the US dollar. With no individual nation controlling it, a BTC standard would provide fairer access to the global economy to all participants.

Bitcoin has been forced lately to answer questions about its environmental friendliness. Before now, its outrageous consumption of energy had been ignored, skirted, not fully addressed, until Tesla withdrew its support of Bitcoin payments, citing environmental concern as its major excuse.

Tesla’s backpedal, and the downswing of the crypto market that followed, refocused the attention on the topic that had been avoided: Bitcoin’s massive energy consumption. As of 2020, the leading cryptocurrency was estimated to consume more than 110 Terawatts Hour per year – more than the annual energies drawn by countries like Argentina and Malaysia.

With the evolution of technology towards more environmentally friendly methods, it will only be logical that Bitcoin adopts similar methods, to achieve mainstream adoption.

Since Tesla’s decision in April 2021, deliberate steps have been taken to reduce the carbon footprints made by not only Bitcoin but also other cryptocurrencies. Ethereum's switch to the more energy-efficient PoS consensus protocol is imminent, while Bitcoin mining farms are turning their attention to renewable energy sources.

The future is green, and Bitcoin increasingly looks like one that could be fully green sooner than later.

The Future of Payments

Upgrades to help Bitcoin scale to serve more people, such as the Lightning Network, may also generate increased Bitcoin adoption by merchants. Bitcoin’s relatively high cost of transacting on the mainchain previously discouraged its use as a medium of exchange.

Lightning Network provides a micropayments layer above the Bitcoin mainchain. Users set up and fund payment channels within which they can transact tiny amounts of Bitcoin before eventually settling balances on the Bitcoin blockchain itself. Only the initial channel funding and settlement transactions require fees.

If Lightning Network adoption continues to grow along with BTC’s market cap, Bitcoin price volatility may reduce to the point where people want to use it in place of fiat currency. This could eventually see Bitcoin replace government-issued currencies entirely.