This week, liquidity protocol Aave put lending services on hold for 17 cryptocurrencies following an attempted price manipulation, as other protocols came under attack.

Aave decided to hit pause on lending after its governance members gave the green light for a proposal from financial modeling firm Gauntlet Networks. This came after an attempted market manipulation attack from Avraham Eisenberg, the trader behind October’s Mango exploit.

Eisenberg borrowed up to 40M CRV tokens on Aave intending to sell the tokens and drive down the asset’s value. He shared his plans to make a profit on short positions on Twitter, however, the attempt ultimately failed. In the wake of this, Gauntlet submitted a proposal calling for Aave to pause assets that posed volatility risks.

Some of the affected tokens include earn.Finance (YFI), Curve DAO (CRV), Gemini Dollar (GUSD), Maker (MKR), and 1inch (1INCH). Following the suspension users will no longer be able to deposit these assets or take loans with them on the platform. 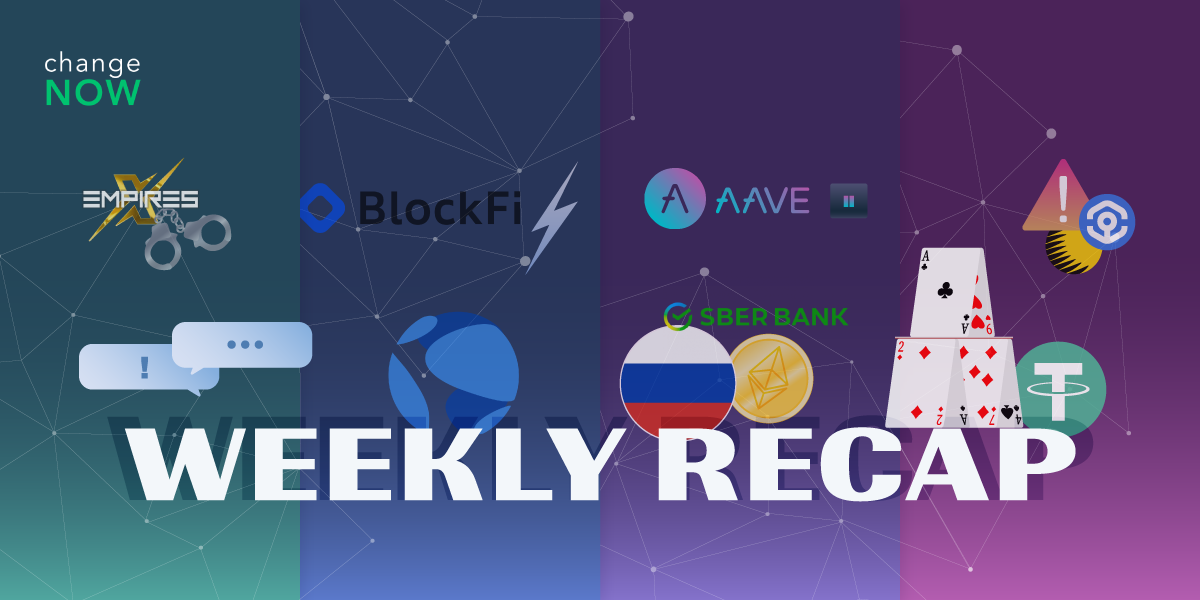 According to a Monday announcement, crypto lender BlockFi has filed for chapter 11 bankruptcy protection as it struggles with liquidity following the FTX crash. The lender alongside 8 of its affiliates submitted the application to the United States Bankruptcy Court for the District of New Jersey.

Notably, the filing uncovered the state of the lending platforms assets and liabilities which both lie between $1-$10 billion. According to the application, BlockFi has more than 100,000 creditors with Ankura Trust Company leading them all. Ankura has unsecured claims worth $730 million while West Realm Shires Inc, FTX US’s business name, trails behind with a $275M unsecured claim.

BlockFi has shared plans to restructure and create an operational model that proves advantageous for customers and other stakeholders.

Sber shared the news during the first international meeting of participants in the corporate blockchain industry. Notably, the Sber Blockchain Laboratory put the event together. In addition to Ethereum compatibility, Sber is set to bring ConsenSys’ MetaMask wallet onboard. Sber users will be able to conduct operations with tokens and smart contracts the platform supports.

Alexander Nam, head of the blockchain lab commented on the new functionality. He believes it will let Sber unite the relevant entities to explore practical blockchain, Web3, and DeFi business use cases.

The attacker’s first target was Ankr. On December 1, the perpetrator exploited one of the firm’s offerings, a liquid staking token product. They were able to gain access via a gap in the smart contract and mint trillions of aBNBc, a reward token tied to the price of Binance’s BNB.

Following this, they moved and swapped the funds using services UniSwap, PancakeSwap, and Tornado Cash ultimately ending up with $5M in USDC.

The second breach saw the attacker get their hands on over 180k aBNBc tokens with 10 BNB ($2,900). Using some of the funds as collateral on the Helio protocol, they were able to borrow $16M worth of the HAY stablecoin. As Helio’s oracle was yet to update aBNBc prices after it fell due to the first exploit, the perpetrator only needed a small quantity for collateral.

The attacker then exchanged the HAY for $15M Binance USD (BUSD), resulting in major losses for Helio.

Collins dismissed speculation that Tether was hiding something, instead noting that the USDT token had maintained its $1 peg thus far.

Unsatisfied by the response, Reeds claimed Tether could be operating a Ponzi scheme.

According to local news agency Yonhap news, a South Korean court has dismissed the arrest warrant for Terra co-founder Daniel Shin. Hong Jin-Pyo, the chief judge in charge of warrants at the Seoul Southern District Court, explained the dismissal.

"Considering the attitude toward the investigation, the circumstances, process, and contents of the statement, it is difficult to see that there is a risk of destroying evidence or escaping beyond the scope of exercising the right to legitimate defense," he said.

Shin was not the defendant whose warrant was dismissed. Three early investors and four Terra developers also saw their warrants canceled for the same reason. A TFL representative cited the development as proof that the prosecutors’ allegations against Terra are unfounded.

Do-Kwon’s warrant remains active as his whereabouts are still unknown.

A United States court has handed a 4-year sentence to one of the main players in the $100M crypto Ponzi scheme EmpireX. Indeed, Joshua David Nicholas, the platform’s head trader, has received 51 months of jail time for his role in the fraudulent scheme. Nicholas will also face three years of supervised release.

According to the DOJ, Nicholas had claimed EmpiresX would provide users daily "guaranteed" returns utilizing a trading bot that used "artificial and human intelligence.” In truth, the bot was fake and the purported earnings were funds from earlier investors. Nicholas ran the scheme for about two years with associates Pires and Goncalves (now believed to be in Brazil) until it crashed in 2022.