This week saw Bitcoin's hashrate hit a new ATH amidst positive movement in the Ape ecosystem prior to its Otherside metaverse launch.

IMF Predicts Countries to Use Mining to Monetize their Energy Resources

On Tuesday, the International Monetary Fund published its Global Financial Stability Report for April 2022. The report focused on the global financial market’s doggedness in the midst of the ongoing Russian-Ukrainian war.

Aside from citing the world’s enduring financial state, it also reiterated concerns about cryptocurrency endangering financial stability. An important challenge is that countries like Russia and Iran may be able to monetize their energy supplies by Bitcoin mining amidst international sanctions. According to the report, as cryptocurrencies become more widely used, they may undermine the national policy agenda. 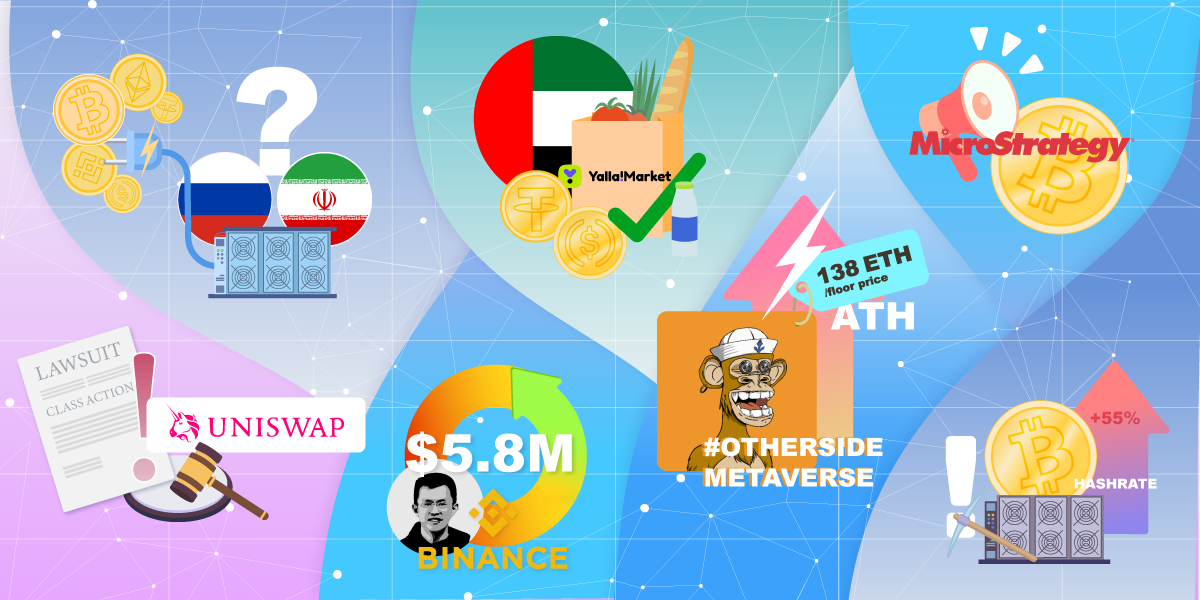 Furthermore, the IMF recognizes crypto technology as a venue for “financial inclusion, development, and competition”. However, the risks it poses are unique and could require multilateral cooperation and comprehensive global standards from policymakers to address. Concerning the use of Bitcoin in financial crimes, Chainalysis assured policymakers that financial crime in cryptocurrency is both tricky and unusual. According to on-chain data, the rate of illegal transactions in the cryptocurrency industry is decreasing year after year.

Despite the fact that some centralized entities oversee cryptocurrencies, the IMF remains suspicious regarding legal gaps that may persist among non-compliant exchanges.

Last week, two law firms invited any investors with grudges against Uniswap exchange to lodge formal complaints. This is how it happened.

On April 4, a certain Nessa Risley filed a class action complaint against Uniswap and its affiliates for illegally marketing and selling unregistered assets. Also, the plaintiff argued that the largest decentralized exchange lacks a KYC method, resulting in significant fraud. Hayden Adams and investment firms Andreessen Horowitz, Paradigm, and Union Square Ventures are also named as defendants in the case.

Risley allegedly purchased multiple microcap altcoins totaling about $10,000 on the DEX platform in the middle of last year. Additionally, the trader noted that she made her first Uniswap trade in May, which resulted in significant losses. The losses were incurred while trading cryptocurrencies including EthereumMax, Bezoge Earth, Matrix Samurai, Rocket Bunny, BoomBaby tokens, and Alphawolf Finance.

As a result, the firms Kim & Serritella LLP and Barton LLP persuaded Uniswap victims to join the class-action case against the DEX exchange. The suits claimed that the defendants permitted illegal activities on the platform.

Last September, the US Securities and Exchange Commission launched an investigation into Uniswap Labs' operations. The SEC however later abandoned its investigations, claiming no wrongdoing.

On Wednesday, a local media outlet reported that services in the United Arab Emirates were already deploying cryptocurrencies in daily transactions. This follows a resolve by Binance in March to accelerate crypto development in the Middle East.

One such service accepting and disbursing crypto is grocery delivery service YallaMarket. The major Emirati delivery recently added cryptocurrencies as a payment method to its mobile app. For the time being, the Dubai-based store will only accept stablecoins like Tether (USDT) and USD Coin (USDC). In order to introduce the new payment option, the delivery firm collaborated with the crypto exchange CoinMena. In addition, YallaMarket is working with partners in the Middle East and North Africa to receive crypto investments.

The business also plans to offer options for salaries payments in USDT in the near future. YallaMarket's CEO stated that the company values its customers' time and claims to be among the early adopters of cryptocurrency. CEO Leo Dovbenko expressed hope about the global use of blockchain and cryptocurrency. UAE-based businesses such as Bake N More Café have begun to accept cryptocurrency payments. The use of cryptocurrencies in Dubai is increasing at a rapid rate.

Binance Reports a $5.8 Million Crypto Recovery from the Ronin Hack

Binance’s CEO CZ revealed on Friday the recovery of cryptocurrency worth around $5.8 million stolen from Ronin's cyberattack in March. Despite this, most of the looted stash remains awol.

Weeks before, a hacking organization had taken over $600 million in ETH from its exploit of Axie’s Ronin Network. This implies that more than 98% of the cash is still lost. There are suggestions that the hackers might be linked to North Korea. Investigators identified the hackers as “Lazarus Group,” which was well-known for assaulting various crypto platforms last year.

According to CEO Zhao, the hackers spread the stolen assets over 86 accounts on the exchange. Similarly, Blockchain firm Elliptic revealed that the hackers previously transferred the funds to multiple cryptocurrency exchanges and dApp, Tornado Cash.

This was not the first time Binance was aiding an exploited crypto outfit. CZ mentioned that the exchange had previously aided other cryptocurrency sites with related issues. After the exploit, Binance promised to back Sky Mavis, the startup behind Axie Infinity, in a $150 million financing round. Several other Bitcoin exchanges also volunteered to assist the victim of the hack.

Furthermore, Etherscan data shows that the hacker's wallet contains approximately 61,000 ETH today, which is worth $179 million. This indicates that the exploiter has already moved a substantial chunk of the loot.

After initial fears of dwindling hashrates because of the Russian-Ukraine war, its computing power has maintained even higher levels. Saturday’s record marks the highest BTC hashrate since January 8, representing more than a 55% increase. Hashrates are basically an indicator of Bitcoin's total computational strength. Measured in hashes per second, the hashrate shows how many times the computer tries to solve a single chain calculation. Moreover, higher rates make it harder for a single entity to attempt to control the network in the 51% attack.

On Saturday, however, Microstrategy CEO Michael Saylor dismissed the rumor. Saylor went on to explain that as a SEC-regulated company, material changes in BTC holdings must be disclosed to shareholders. Furthermore, the CEO stated that material changes include acquiring and holding Bitcoin as well as making changes to cryptocurrency holdings.

Furthermore, he highlighted that SEC filings are open to the public. Although some appreciate Saylor's explanation, others remain skeptical, trusting that the rumor of Microstrategy selling BTC is true. Saylor has been a vocal supporter of the leading cryptocurrency. Also, he has stated repeatedly that he will not sell his coins anytime soon, declaring that he intends to “hodl”.

Bored Ape’s NFTs Rise in Value Prior to Metaverse Launch

On Sunday, the popular Bored Ape Yacht Club NFTs set a new all-time high. The collection’s floor price rose significantly, along with the price of its affiliated coin, Apecoin (APE).

The floor price, rather than the average item price, refers to the lowest price for an NFT in a collection. Moreso, the attainment of the new milestone indicates that the overall value of the BAYC NFT collection has risen. An ATH of 139 ETH, valued at $389,000, doubled the floor price from January's price of 67.3 ETH. Furthermore, the BAYC collection has the highest floor price in the NFT market, outperforming collections including CryptoPunks, Azuki, and Moonbirds.

The increase comes in the wake of the official announcement of the Bored Ape Yacht Club NFT metaverse called "Otherside." The Otherside is expected to be launched on Saturday. Along with BAYC, Mutant Ape Yacht Club has also seen an exponential increase in its floor price. The floor price of the NFT collection surged to a new high of 40 ETH.