US Couple Gets Married in the Metaverse

Traci and Dave Gagnon are the first official couple to get wedded in the metaverse, after tying the knot on Labor weekend.

Although a good number of people have a rather tentative approach to the metaverse, newly wedded Dave and Traci Gagnon thought it was a great idea to have their nuptials there as well as in the real world. Their decision makes a lot more sense when you factor it in that they had their first meeting in the cloud.

How Did the Gagnons Pull Off a Virtual Wedding?

While it might be somewhat difficult to picture a ceremony held in the metaverse, it wasn’t all that different from a regular wedding. The event took place back in September over the labor day weekend and was live-streamed for people who were unable to attend. 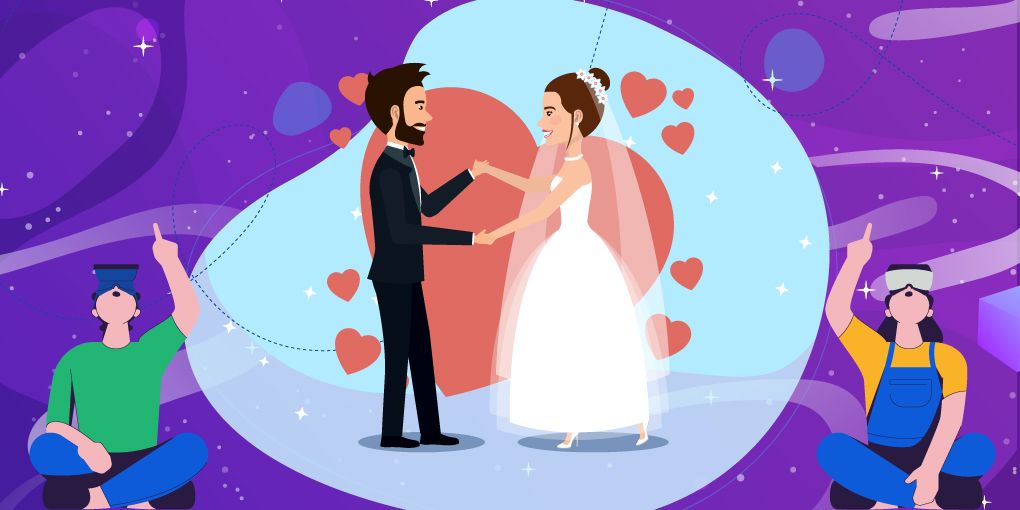 Guests who could make it only had to download the software and make an appearance with avatars they had created. Through their computers, they were able to witness Traci’s avatar being walked down the aisle by the avatar of her personal friend.

The ceremony was hosted by Virbela, a company owned by eXp World Holdings. Traci and Dave both hold positions as real estate agents in a subsidiary of the latter called eXp Realty.

Virbela sets up locations for work-related or educational functions and the couple’s avatars met in Las Vegas during a company event. Once they shared news of their engagement at work, the company president decided Virbela would host their wedding for free, which Ms. Gagnon estimates would have cost about $30,000.

The virtual world company received photos of the couple and the decor for the ceremony so they could integrate images of the real-life venue and other touches into the metaverse event. They were even able to replicate Ms. Gagnon’s wedding dress for the avatar.

As metaverse weddings are not legal at the moment, the couple’s other wedding took place simultaneously at Atkinson Resort & Country Club, New Hampshire, which is where they reside. It was conducted by a friend of theirs, David Oleary.

Endless Options in the Metaverse

Regardless of the ongoing internet debate as to whether a metaverse wedding is a good idea or not, Traci and Dave have no regrets. According to Traci, the virtual event was “exciting” and “easy” but the best part was the connection metaverse provided.

With all of this in mind, the Gagnons have said they enjoyed their virtual wedding so much, they might even go for a honeymoon in the metaverse. Following the pandemic, more and more ceremonies have taken place virtually; from Zoom weddings, the gaze has gradually shifted to the metaverse.

A whole new industry centered around virtual weddings, birthdays, and other celebratory events might be developing rapidly, illustrating just how limitless the possibilities are for couples in the metaverse.