For those who have been around in the cryptocurrency scene for a while, ICO’s are nothing new. It has even come to the point where ICO’s are rarely held anymore. Most projects nowadays that are eager to raise money from investors either search for private investors, VC’s or by means of an IEO, an initial exchange offering. This is basically an ICO ran by an exchange.

There have been numerous IEO’s so far and many of them have been performing well in terms of price and whatnot, but the big difference with the ICO’s from back in the day is the amount of funding that’s being raised.

Most projects nowadays raise approximately 1-3 million in US dollars, while back in 2017, almost every ICO was beyond that.

Let’s have a look at the projects that have raised the most money in the bull run phase of the end of 2017 and what are they doing at this right moment. Did all the ambitious plans come to reality or are investors simply screwed over by nothing more than big plans? 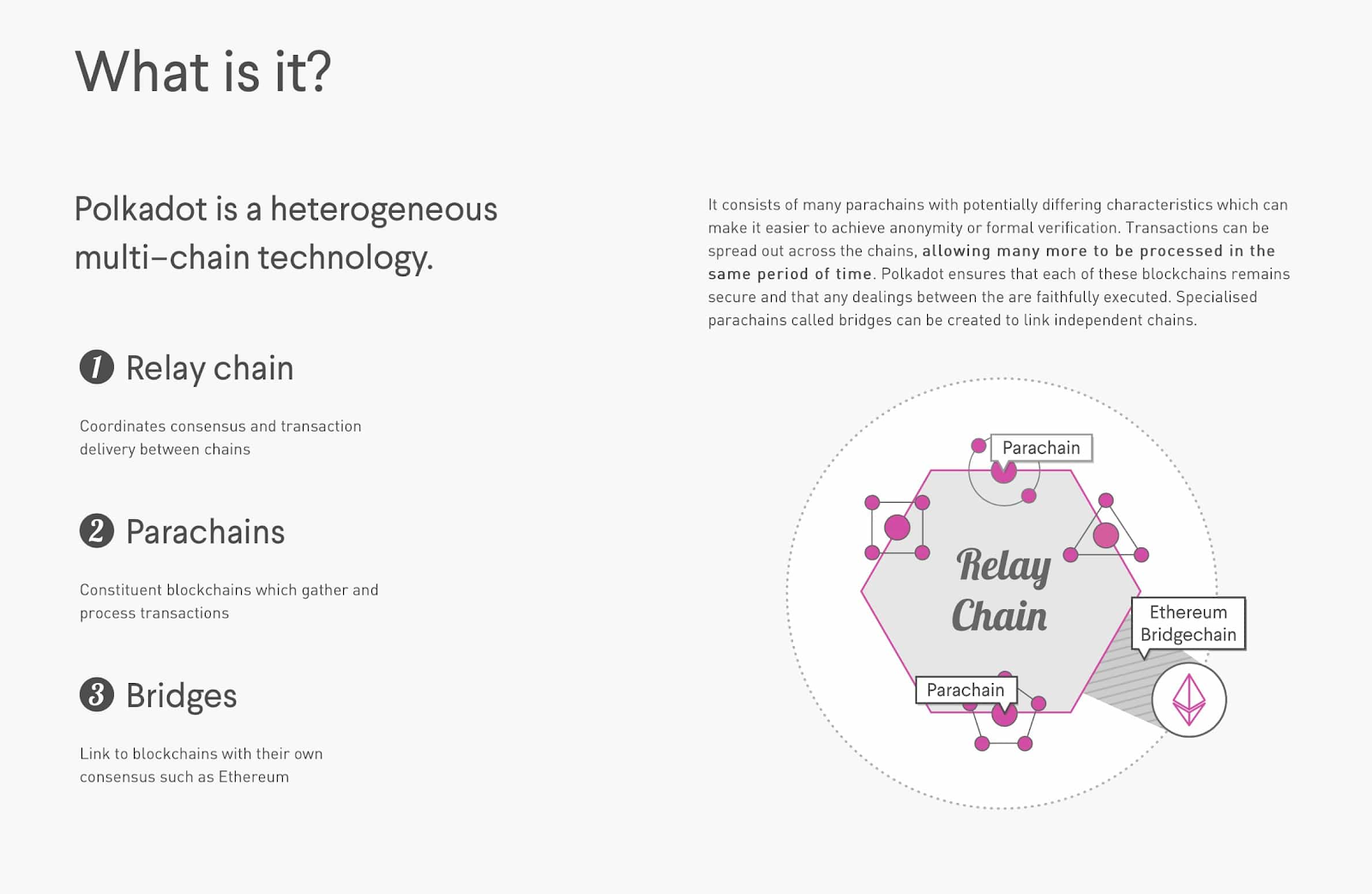 Notice that we are starting off our top 5 with the lowest amount raised, which is already incredibly high — 145 million US dollars raised during their private sale and ICO combined.

With that money, Polkadot has promised to be a heterogeneous multi-chain technology. With the combination of three different sorts of chains, scalability, maximum trust and operationality can be achieved. With their token sale which was held from 15 October — 27th of October 2017, they released a roadmap with the plans to build up to an initial launch in 2019.

After doing some digging it’s evident that Polkadot has been working very hard to achieving the actual launch in 2019. With a couple of months left and one of the more recent blog posts mentioning the fact that the mainnet launch is close, I believe they are on schedule. One thing to realise though is the fact that there is currently no use-case yet for the DOT token, when I was scrolling through the whitepaper I even found out that the token is not designed to replace any currency as it’s simply a utility token, yet the inflation is unlimited. In fact, the tokens have not even been distributed yet as they will with the Genisis block of the mainnet release. In the Telegram channel an admin answered the following on the question if there are any DOT tokens for sale;

You cannot buy tokens at the moment. This is the only information released about the upcoming sale if there is one: Web3 Foundation will distribute up to 20% of DOTs prior to network launch later this year (see Light Paper or FAQ). As Project Founder Gavin Wood said in his year-end recap, there may be a generally available public sale for some portion of that amount at some point this year.

Interesting to say the least. Another token sale after the already raised millions during the token sale with a token that has yet to be distributed. I am curious to see how this plays out as we get closer and closer to the actual launch and the actual distribution of the token. This means investors will finally receive the tokens that they have invested in during the ICO nearly two years ago. Quite a nice way of eliminating the weak hands.

As one of the few exchange tokens in this list, BNT is the token associated with The Bancor Protocol. After the token sale that ended on the 12th of June in 2017, the company behind Bancor raised 153 million dollars during the ICO. The tokens were then sold for 3.92 USD per token, with the price now being 0.34 USD per token. Now given the fact that the entire market has taken a nosedive into the red, these numbers aren’t that shocking. The one thing we’ll look at is the actual products that have been promised and that have been launched up till today. What Bancor promised was the following;

Bancor is a Decentralized Liquidity Network that allows you to hold any Ethereum token and convert it to any other token in the network, with no counterparty, at an automatically calculated price, using a simple web wallet.

Just do a quick Google search and voila, there you have a decentralized exchange that will allow you to swap any ETH token for any ETH token. After launching their Ethereum exchange for a while and running it successfully, they even added the support for EOS tokens. One thing to look at to see if a company is still active and still operating are the job openings. Bancor currently has four positions yet to be filled, which indicates that the company is healthy and operating as they should. For an investor, it’s probably hard to see the value of the token having decreased that drastically, while the company has been steadily progressing and delivering quality work since the beginning.

Stepping up the amount raised with just a couple million, Sirin Labs is a company that’s ambitious with their plans. Where most projects announce needing the many millions for developing revolutionary techniques, Sirin Labs is building an actual physical product. With the money raised during their ICO, where the SRN token was sold for 0.47 USD, they have promised to release the first Open Source Blockchain Smartphone and PC. Now almost two years later, the smartphone is available to order with the SRM coin for a discount, or with any other card of your preference. The phone has an integrated cold-storage wallet, a place to swap your currencies and a Dapp center while running the OS that’s specially designed for the phone.

All of this was revealed during the Media Launch at the end of 2018 with special guests like Leo Messi and Gennady Golovkin. The spectacular event was the big announcement and revelation of the product they had been working hard on for the past years. All of these development costs, marketing actions and what not must have cost tons of money, but with a physical product that’s selling for $999 apiece, it would make sense that the company is, in fact, creating revenue. The fact that this phone is being sold is hard to tell as no actual numbers are shared to what volume of sales we can see up till this date. There are a few job openings, just four, and a Telegram channel of shouting people asking for more use cases for the token. It’s good to see another product that’s finished and actually available to order, but where is the function of the token at this point?

Taking a big jump here leading up to 232 Million USD raised during the ICO that was held on the 1st of July in 2017, Tezos is a name that’s currently active and rolling in the charts. Whereas the token was originally sold for 0.47 USD, the token is now worth 1.03 USD. In comparison to any other ICO in this list, the token has actually increased in value and more than doubled even. Now, why is that? Tezos has promised to create a self-governing decentralized blockchain. They have done so and with that, strived for actual decentralization of a project with of course, still a central party behind the company working on the main development. But given the fact that this project is open-source and is doing what many other projects would want to, be truly decentralized, the market is loving it.

Currently being number 18 on Coinmarketcap, XTZ, the coin that’s evolving around the Tezos network is being traded on almost any major exchange. One important one missing in that list is Binance, but that could just be a matter of time. With daily activity and progress on the code, that’s being published on Github, it’s safe to say that Tezos is going places and will empower many new activities that might not be available on other blockchains. What the future holds for Tezos? Only time will tell. 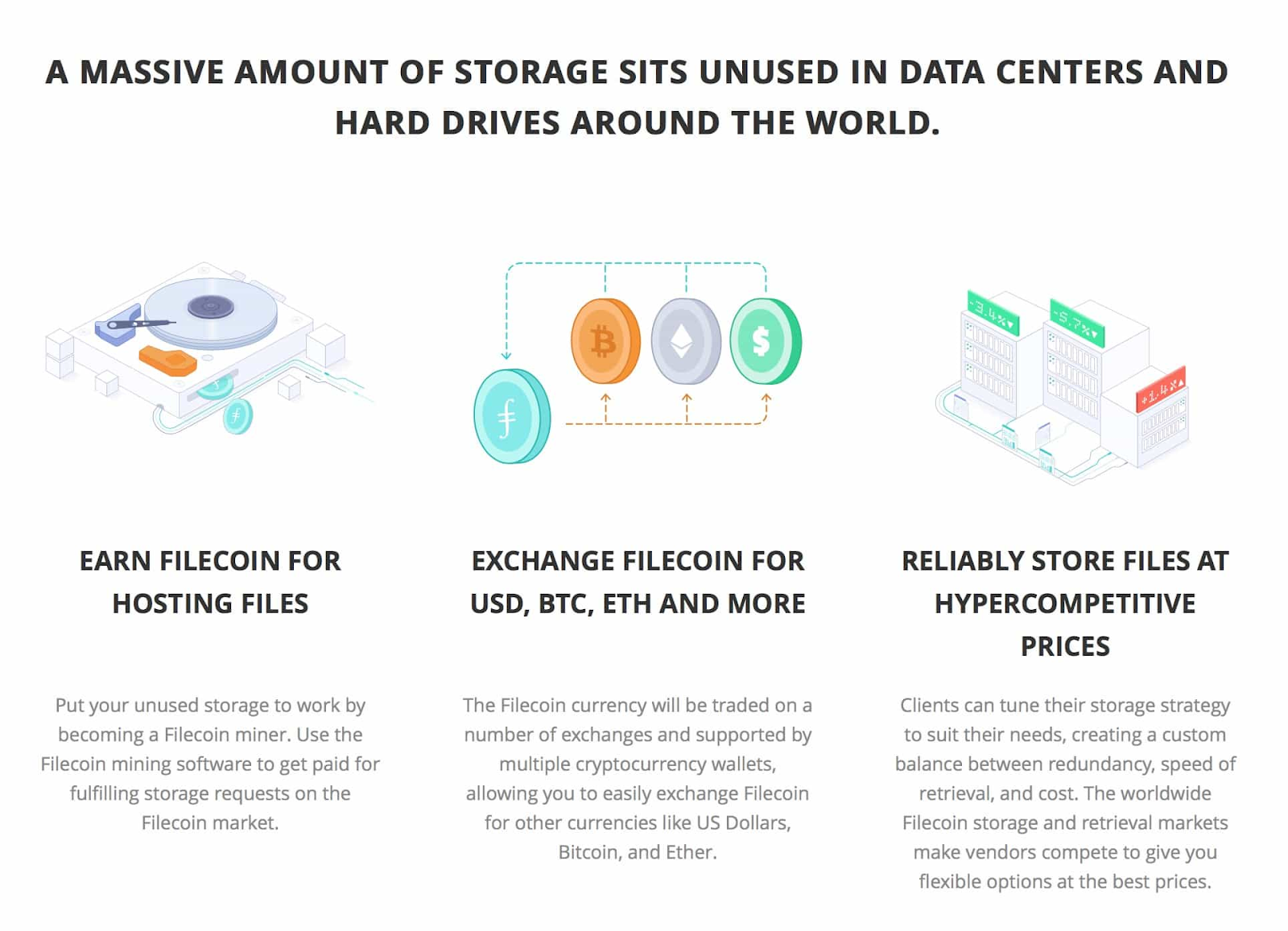 The biggest of them all, the mother of all fundraisers, Filecoin. Selling their 40 million tokens back in 2017 for 5$ a piece after doing an auction type of ICO, Filecoin ended up raising $257 million USD. That’s a whole lot of money for a project of this size, what size that is is hard to tell. At first glance, it’s an ICO like many, ambitious ideas, solid team and some proper research done prior to developing the idea. The enormous amount of money raised during the ICO, is one thing that sure stands out. Why do they need those amounts of money, and what will they do with it?

Reading the announcement of the token sale completion, they are overwhelmed by the amount of money they had raised. Further than ‘growing the team’ and making sure the funds are put to good use, there’s no find. Filecoin strives to put all the unused data that’s available on many computers, hard drives and other storage units to use and in reward for that, payout in Filecoin. Sounds good, but the actual Filecoin is not there yet. Similar to Polkadot, the tokens are distributed after the mainnet launch of the project. This means that investors will have to wait a while longer before having access to their filecoins. When the mainnet is due is unclear, but one thing that’s for certain is the company behind Filecoin, Protocol Labs. A big and robust company that’s hiring more and more people and looking for people that are eager to contribute to the open-source industry. It’s an ambitious project within many eyes an accidental raise that was way higher than expected. That being said, we’ll let time tell if that money was put to good use or investors will simply turn against the company and request refunds, which probably will not happen.

The year of 2017 was a wild year for many projects and it has allowed many companies to raise more than enough money to sustain their projects for many years. It’s positive to see the biggest ICO’s have actually realised their plans, one more than the other, but these companies are still breathing and doing well. As mentioned at the beginning of the article, the current form of raising money, the IEO, is an interesting subject that we will zoom in on further in the upcoming article.