Privacy coins have been an integral part of the crypto landscape since 2014, allowing users for anonymous transactions.

Why doesn’t Bitcoin ensure enough privacy? What anonymity coins are the most popular today, and what challenges do they face? ChangeNOW interviewed a few experts to take a deep dive in the subject. 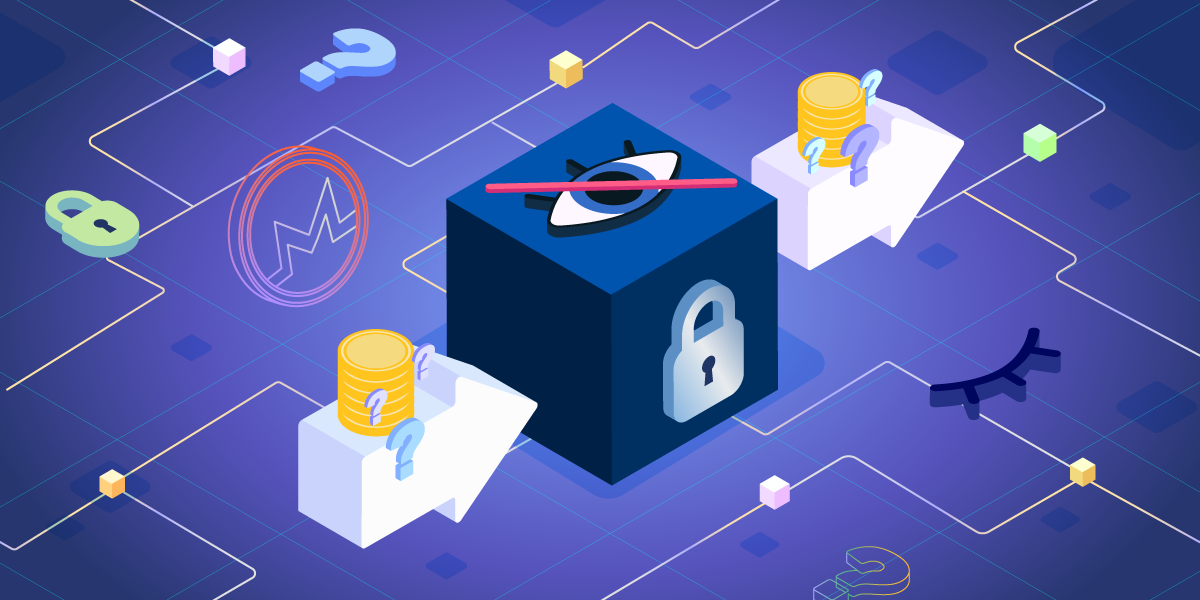 Privacy coins are cryptocurrencies that allow for anonymous transfer of value – they hide transaction details and make asset tracking impossible. For instance, Monero hides amounts and wallet addresses of senders and receivers, so it’s possible to send money and stay 100% anonymous compared to most other blockchains.

Take Bitcoin. When you transact BTC, you are seemingly anonymous – but all your transaction details and your wallet balance are visible to the public. If someone manages to link your wallet address to your identity, they will know how much money you have and who you send it to.

To make blockchain transactions fully anonymous, privacy coins were invented. One of the most popular ones is Monero (launched in 2014), and since then, many other cryptocurrencies ensuring privacy in different ways have emerged – ZCash, Firo, Verge, and others.

Privacy coins have become especially popular when CBDCs were introduced – digitized national fiat currencies allowing authorities to fully control users’ transactions. Csilla Brimer, сo-founder of Willenrimer & MAGIC Monero Fund Committee, says this has become a nightmare of crypto enthusiasts with its 24/7 monitoring and defining where you can spend money and where you cannot. 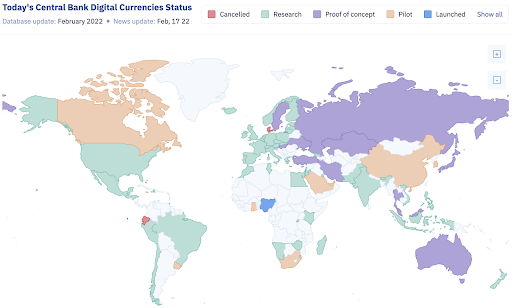 CBDCs across the globe in 2022. Image source

The expert said that before 2020, every educational event had to start with an explanation of fiat currencies and their drawbacks. “We always had to start with the boring 20 min introduction, and It was EXHAUSTING”, says Brimer. But then the US Government printed $10.5+ trillion ($27 billions daily) to mitigate the economical effects of coronavirus, which sparked inflation. No one needed any more explanations of the benefits of digital scarcity: the crypto bull run started soon after the March market crash while traditional markets were stagnating.

Csilla Brimer believes this will be the case for privacy coins: given the growing influence of CBDCs, people will understand the importance of anonymity of financial data, and this should foster the adoption of privacy assets. Alexandre Ederer, “XVG Ninja” and Technical Marketing Engineer at Verge, believes that governmental regulations will make privacy coins go up in value.

Anonymous cryptocurrencies reduce the amount of private data you are exposing to make a payment. Csilla Brimer brings an example: when MobiKwik mobile payment’s wallet application was attacked, 8.2 terabytes of personal information belonging to 3.5 million people were leaked to the darknet. Another hack affected Ledger, a cold wallet focusing on security: when 1 million emails leaked in 2020, the names, phone numbers, and home addresses of 9,000 crypto owners became publicly available. Privacy coins would have never allowed this. “Financial privacy is important in order to safeguard user data from malicious cyber attacks”, the expert concludes. “Limiting data collection equals limiting risk.”

Alexandre Ederer says he prefers staying private in his daily life. “I don’t like to use my card at bars, I don’t want to use my card when I go to Starbucks. I like to pay with cards for large purchases so that I can have insurance and receipts, but for most of my life, I want to spend cash because I don’t want banks to see what I see and do.”

When it comes to online purchases, Alexandre uses Verge – not a full-fledged anonymity coin, but a cryptocurrency allowing for privacy on the public blockchain. The coin protects users by hiding their metadata, which helps keep their geolocation and money destination in secret. It’s like using an ATM to withdraw cash and make purchases with it to avoid using a bank card. Alexandre explains that activists in some countries have a special need to keep their finances private because otherwise they are in danger.

Another aspect is financial privacy of businesses. They also need confidentiality because without it, malefactors and competitors can analyze their data, use it in malicious purposes including font-running, exploits, and theft.

Let’s now review some of the most prominent privacy coins.

Launched in 2014, Monero is the largest coin in terms of market capitalization and transaction volume. It makes payments unlinkable and untraceable, and all its users are anonymous by default. The technical solutions that power Monero include stealth addresses and ring signatures.

Stealth addresses are unique wallet addresses that a user creates to send a transaction. Such an address can be used only once. The receiver can use it to see how much money they got from the sender, but no one else on the blockchain can do the same. In the public ledger, there is no link between the sender and the receiver, and it’s impossible to see how the wallet balances changed.

A ring signature protects the sender. Whenever a user signs a transaction, a group of Monero users participate automatically to make one signature for it, so no one from the general public can see who actually signed the transaction.

ZCash implements a different technology. Back in 2016, its founders wanted to introduce a cryptocurrency similar to Bitcoin but with additional privacy features. The coin leverages a cryptographic tool called Zero-Knowledge Proof – it allows users to send crypto without showing their addresses to anyone else. The receivers and transaction amounts are also hidden. This principle is implemented in a zk-SNARK security protocol that signs ZCash transactions.

There is a great diversity of anonymous cryptocurrencies. Secret, Firo, and Verge are the largest ones, and each offers its own privacy protocol. For instance, Firo takes advantage of the Lelantus and Lelantus Spark protocols that break links between senders and receivers to make the payments untraceable. The anonymity set used in ring signatures was increased to 65,000, which is thousands of times more than in Monero. Firo has also implemented Dandelion++ – an algorithm that broadcasts transactions across nodes making it impossible to trace the node that initiated the transaction.

There is a popular belief that privacy coins are widely used in criminal activity. In reality, most illegal transactions are processed in fiat money, but anonymous digital assets still raise more concerns in the public than usual cash.

Csilla Brimer brings some statistics: 2% of global GDP is used in money laundering, while only 0.5% of crypto is involved in crime. According to the Chainalysis blockchain research company, only 0.34% of crypto transactions in 2020 were associated with illegal activity. This number has risen to 0.62% by now, but this is still way lower compared to how much fiat money is used for illicit purposes.

Another aspect is the biased logic about KYC and AML, as explained by Csilla Brimer. We have KYC-enabled crypto platforms, but money launderers avoid them, while all the KYC procedures have to be completed by law-abiding citizens. “This means that not only does KYC fail to prevent money laundering, but it actually creates an unnecessary cyber security risk for the users”, the expert says.

Jordan Sanchez, a free speech and privacy advocate, supposes that privacy coins are associated with crime because they allow hiding transactions. However, fiat currencies such as US Dollars, Euro, and the others, are still widely used in illegal activities. Privacy coins are not close to being unique to crime. Sanchez believes in the opposite: “Crypto stands out because it's backed by computers that don't play favoritism, which in the long run would reduce crime.”

Cryptocurrency, and especially privacy coins, helps enable transactions for professionals, artists, oppressed political and minority groups, and unbanked people. Benefits of this freedom appear to be more important than fears about crimes.

Besides the myth of widespread use of privacy coins in the darknet, there are some truly relevant challenges that this type of asset is facing.

Problems of Privacy Coins and the Ways to Solve Them

Many people are afraid of cryptocurrencies in general and privacy coins in particular. According to Jordan Sanchez, they are often viewed as "spooky nerd computer code money", and people aren’t sure they should use it. The expert sees the solution to this problem in changing the public perception of crypto: “We need to help translate in people's minds while it is a technology, it is also money like the digital transactions that happen on your debit/credit card.” User-friendly crypto services like PayPal, Venmo, or Cash App should emerge to help users embrace cryptocurrency easier.

There’s the need for faster transactions. Csilla Brimer believes we need a Layer-2 scaling solution for Monero to enable XMR transactions with instant settlement. The current Monero block time is 2 minutes, and with 10 necessary confirmations, 20 minutes are needed to finalize a payment. Apparently, Monero should be scaled without harming its anonymity and security.

Privacy coins should be embraced by large public blockchains. As Alexandre Ederer explains, buying a token or an NFT makes your wallet visible and identifies you. If Verge were integrated into chains like Ethereum, Fantom, or BSC, it would give privacy to different projects and crypto enthusiasts using these networks. This could be implemented via a dedicated Verge bridge, which is technically challenging, but “everything’s possible when you have smart minds looking at things,” Alexandre concludes.

Compliance difficulties. Jordan Sanchez claims that small businesses have to comply with the IRS requirements but have troubles doing so with privacy coins. It would be great to find a convenient way to preserve anonymity but give businesses the opportunity to comply. Privacy coins are widely used in developing economies but are avoided in the USA and Europe as organizations are afraid of tax authorities.

Non-compliant solutions also need to be accessible. Along with compliant Coinbase and Kraken, we need crypto platforms like Bisq for those who want to stay anonymous in the crypto space. This is a great way to boost adoption of privacy coins.

Merchant’s experience with privacy coins should be improved. Simple tools to accept anonymity assets and run business with them would facilitate the use of privacy coins in e-commerce. Jordan Sanchez mentions two examples: universal crypto QR codes that would allow people to pay in their preferred coin, and a system of payment tracking. Large merchants find it difficult to keep track of receipts, so robust transaction ID systems would help.

Alexandre from Verge says that in the latest rise of NFTs and metaverses, he sees hype rather than a bubble. “What goes up, must come down – and as you see, recently it all came down”. There are tons of crypto projects, and Alexandre recommends involving in them not out of the desire to become rich overnight, but the confidence in their long-term value and because you believe in the technology and want to use it. “Fully decentralized and volunteer-based projects tend not to go away because people believe in their vision. People will always need cryptocurrencies like Verge as they are fast and private,” says XVG Ninja.

Privacy coins offer a great way to send money to anyone if you want to hide the sender, receiver, and the amount. This class of digital assets faces some challenges, but they mostly include the accessibility for merchants and those who want to comply with tax authorities. The protocols themselves are fine and have proven reliable and helpful to millions of users. If you want to take advantage of privacy coins, start with buying some Monero, ZCash, or Verge on ChangeNOW anonymously and with no hidden fees.

Welcome to the NOW experience! For ultimate privacy and security, use NOW Wallet – an easy-to-use non-custodial cryptocurrency wallet that allows you to store, buy/sell, exchange, and stake cryptocurrencies directly from the app on any mobile device.