There are thousands of blockchain-based software solutions in 2022, but hardware applications of the distributed ledger technology have remained scarce.

IoTeX is changing this – the project has designed a set of IoT (Internet of Things) devices that exchange information via blockchain, which ensures a better user experience and stronger data protection.

Let’s see what IoTeX is and how its devices and blockchain work. We will consider IOTX price predictions and the best ways to buy and store the token.

What Is IoTeX (IOTX)? There are various blockchain-based solutions for the Internet of Things today (IOTA, Helium, and others). Platforms like Helium even facilitate the connection of IoT devices to the internet with special hardware, but very few have yet ventured to create gadgets that would run on a blockchain by design. One of them is IoTeX.

The project aims to solve a problem of today’s IoT that relates to any non-blockchain-based solution – lack of security and a single point of failure. Let’s say you have a security camera that transmits data to a cloud using the internet. If it’s hacked, an intruder would get access to sensitive information. The same applies to the whole security system – if a malefactor hacks into your network, they can lock your doors, disable alarms, and shut down the phone line. Since all these are connected to the internet, they are at risk by default.

With IoTeX solutions, the probability of such a hack radically decreases. Let’s consider Ucam – a blockchain-based security camera designed by the project. Only you have the private keys to access data that has undergone end-to-end encryption before being sent to the cloud. This approach has been proven secure – the platform has never experienced public breaches.

Another IoTeX device is Pebble – a gadget that verifies real-world data such as location, motion, light, and temperature. Why not use simple GPS devices, though? As we saw above, connection to the internet without an extra layer of security bears a high risk for such gadgets. What’s more, an immutable and transparent blockchain helps verify data. Thus, you can use your confirmed location to vote in elections in a specific jurisdiction or even prove the validity of news. Pebble is used in supply chains, logistics, and the automation of business processes.

IoTeX is run by a team of scientists and top-level engineers with profound expertise in blockchain, hardware, and the Internet of Things. The company was founded in 2017 in Silicon Valley by three enthusiasts Raullen Chai, Qevan Guo, and Jing Sun who have previously worked at Google, Facebook, and Uber.

Raullen Chai has a Ph.D. in cryptography research at the University of Waterloo where he did research in blockchain back in the late 2000s. In IoTeX, Chai is responsible for strategy. Jing Sun, a founding partner of Sparkland Capital who has led 40+ innovations in blockchain and IoT, is in charge of operation and investment. Quevan Guo, responsible for product, has a Ph.D. in machine learning and has been an engineering manager at Facebook before IoTeX.

There is no published comprehensive 2022 roadmap for IoTeX, but the co-founder Raullen Chai has briefly outlined it on the platform’s official YouTube channel.

First, Chai ran through the main achievements of 2021, which include the introduction of cross-chain bridges with Ethereum and Binance Smart Chain, the IOTX listing of Coinbase, and the launch of ecosystem projects in DeFi, GameFi, and NFT segments.

In 2022, IoTeX is to focus on the development of MachineFi – a paradigm in which machines and intelligence will be connected via Web3 (blockchain technology) and financialized to deliver value and ownership to the people rather than corporations. IoTeX has already launched the MachineFi portal and is going to introduce the MachineFi marketplace. In 2022, the platform will also focus on the promotion of the Pebble location tracking device.

The IoTeX blockchain is based on the Delegated Proof of Stake consensus algorithm. This means that the IOTX token holders delegate their right to confirm transactions to validators who then submit blocks and distribute rewards among delegators according to their stakes.

IOTX was originally launched in 2017 as an ERC-20 token, but then migrated in 2018 to the dedicated IoTeX blockchain that remained compatible with Ethereum. IOTX staking went live in 2020.

The IoTeX network boasts a faster block time and cheaper fees compared to Ethereum. The IOTX token is used as gas in the blockchain and as a means of exchange in dApps and cross-chain bridges.

IOTX is a deflationary token that leverages the so-called Burn-Drop mechanism. When the first million IoTeX devices are onboarded to the network, a smart contract will “burndrop” $1 billion worth of IOTX tokens – 90% will be burned, and 10% will be distributed among delegators who held IOTX for at least 91 days. Thus, the network will reduce the token supply when there’s an influx of new users, which is supposed to make IOTX scarce and push its price up.

How to Mine IoTeX (IOTX)?

Since IoTeX is a DPoS network, you cannot mine the token, but you can earn it through staking. On the IOTX Staking page, you can choose a delegator and entrust them with your coins to earn rewards. Currently, 2.8 billion IOTX worth $188 million is being staked by 37,580 users. The platform promises an 11% APY on your stake.

IOTX didn’t get much traction in the first years of existence. The token hit the first major price peak during the general crypto rally in May 2021, but the greatest achievements were only ahead. In November, the asset surged to the all-time high of $0.26 as IoTeX announced a few large listings, launched NFTs and DeFi projects, and rebranded to focus on MachineFi. 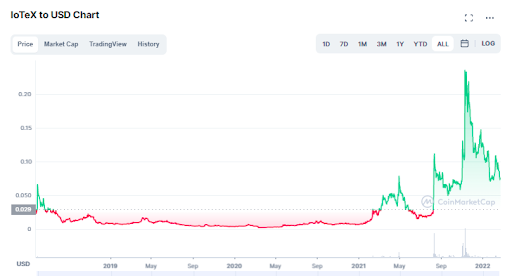 Note that all these predictions have been made by machine learning mechanisms, and the services emphasize they shouldn’t be seen as investment recommendations.

How Can I Buy and Trade IoTeX (IOTX)?

You can use centralized exchanges and non-custodial exchange services like ChangeNOW to buy and trade IOTX. CEXes offer instant token swaps and advanced trading tools, but they keep private keys from your crypto which makes it vulnerable since you don’t technically own it. With non-custodial exchange services, you can buy IOTX using a wallet where you store private keys from your tokens and have complete control over your funds.

IoPay is the official IoTeX wallet that is available for mobile operating systems and desktop. It supports IOTX and all the tokens based on the IoTeX blockchain. In IoPay, you can stake IOTX and vote for delegates to earn an 11% APY. The wallet allows you to participate in airdrops and giveaways, deploy smart contracts, and more.

Trust Wallet is a good solution if you want to store IOTX together with the rest of your portfolio – it supports over 50 blockchains. Trust is a Web3 wallet, meaning that you can connect it to IoTeX or Ethereum dApps and enjoy your DeFi or NFT experience. IOTX staking is also possible in this wallet.

The most simple and secure way to buy IOTX is ChangeNOW. We don’t store your private keys and don’t ask you for any private data, which allows you to buy IOTX anonymously. The whole process is divided into 4 simple steps that users complete in 5 minutes on average. ChangeNOW partners with multiple liquidity providers, so we search for the best exchange rate at the time of the swap and pick it for you. No hidden fees are involved – everything we charge is already included in the estimated rate.

IoTeX creates blockchain-based hardware solutions like security camera Ucam or data tracker Pebble, making the Internet of Things more hacker-proof and reliable. IoTeX blockchain is a backbone of the system that runs on the Delegated Proof of Stake consensus mechanism: stakers can delegate their tokens and earn an 11% APY. The project is managed by a strong team of experienced cryptographists and hardware experts.

IOTX price predictions for 2022 and on are rather positive as the platform is developing a promising MachineFi segment. If you believe in the future of IoTeX, head on to ChangeNOW and buy some IOTX in 5 minutes without registration.