After Canadian authorities evoked the Emergency Act to seize Freedom Convoy donations, the majority of its crypto charity remained unlocked.

How the Protests Started

The Freedom Convoy protests were a weeks-long demonstration against Canada's COVID 19 vaccine laws. In the heat of the pandemic, lockdown laws were implemented, barring Canadian residents from leaving their homes. Truck drivers and other essential workers, however, were exempt from this law. But as the first vaccines came on the scene and global restrictions began to ease, Canada soon passed new laws. These laws would require Canadian truckers to provide evidence of their vaccination at land cross-borders between the United States and Canada or face a two-week-long quarantine.

The new ruling caused some outrage amongst Canadian truckers, and the first of the protests began in late January. Truck drivers poured into the country's capital, Ottawa, blocking off major roads and highways and honking in protest. The convoy also blocked off the Ambassador Bridge in Ontario, a major cross-border between Canada and the United States, costing Canada billions of dollars in trade. Soon, the government was forced into action, as authorities claimed the protests hindered daily activities. 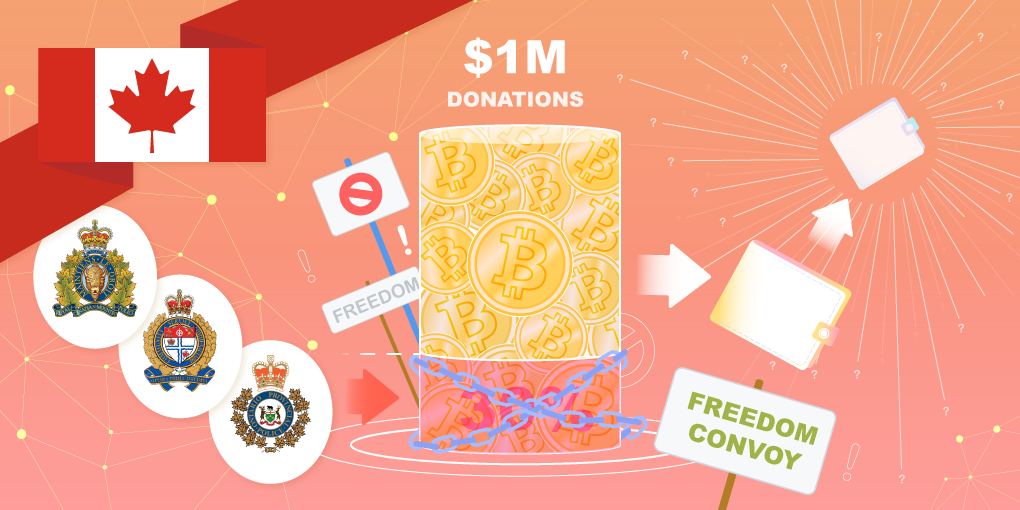 While the Freedom Convoy has drawn mixed reactions all over the world, it has not been without foreign support. The movement gained immense financial backing globally within days. A GoFundMe account created to garner funds for the protests reportedly raised over 9 million USD.

The Canadian government responded to the protests by invoking its Emergency Act, a first-time occurrence since its creation in 1988. The Act allowed banks to freeze accounts and seize assets without requiring an official court order. Before long, The Freedom Convoy’s GoFundMe page was also shut down.

However, after donations to the GoFundMe were blocked, protesters set up a Bitcoin Fundraiser. In the following week, those who were able to donate to Canadian truckers met a new target of 21 BTC, totaling more than $900,000. The fast response did not go by without punitive action from the government. Following the fundraiser, the Canadian police forced crypto exchanges to freeze 34 wallets tied to the trucker protests.

While the Canadian Authorities seized about 5 BTC at first, protesters soon knew to beat the system. According to a report by CBC, about 14 BTC of the donations were transferred to an intermediary, who distributed it to numerous non-custodial wallets.

In the backdrop of the police crackdown, the CEO of Kraken Jesse Powell encouraged truckers to choose the alternative of withdrawing via decentralized crypto exchanges or peer-to-peer. This way, the government cannot oversee their transactions.

There is evidence that the BTC donations are being distributed hand-to-hand to truckers in the protest. Protesters are handed seed phrases to a crypto stash, along with necessary instructions, as seen in this video. This renders the seizure process significantly harder, as hundreds of smaller units of crypto are difficult to trace.

While the Canadian government might be able to exert its authority to a certain extent, cryptocurrency still largely remains untouchable by governments. Crypto stored in non-custodial wallets cannot be seized or frozen, and peer-to-peer trading continues unprohibited.