ETH has already made a significant impact on the crypto industry with its technologies and ideas.

Inspired by Bitcoin, a young wizkid Vitalik Buterin published a white paper that laid the foundation of the Ethereum network in 2013. The following year he organized a crowd sale to fund the development of ETH. In 2015, the very first block of data appeared on the network thus launching the Ethereum platform. Ethereum is a software platform based on blockchain tech. It allows developers to create decentralized applications also known as dApps. The founder of Ethereum, Vitalik Buterin, calls his creation a “World Computer”. It doesn’t operate on one device but runs simultaneously on thousands of computers around the world.

The internal currency of the platform is also called Ethereum, Ether, or ETH. It is used to maintain the blockchain and execute smart contracts and plays a role of fuel on the network. Also, it is a digital currency, like BTC and other crypto coins.

Ethereum can be described as a huge computer that allows devs to build programs. In fact, the Ethereum team has developed Ethereum Virtual Machine (EVM) that allows running code with smart contracts.

Smart contracts have the following advantages:

Ethereum blockchain is not free to use. To run a smart contract, you have to pay a fee in Gas – a small piece of Ether (ETH). It is a kind of digital fuel that facilitates transaction processing and maintains network security. Gas is a unit used to calculate ETH fees and usually ranges from several dozens to several hundreds of Gwei (1 ETH = 1,000,000,000 Gwei). It is dynamic and increases when the network is overloaded and decreases when there is less competition for resources.

A transaction fee on the Ethereum network will be calculated using the following formula:

One of the network’s principles is the more gas you pay, the faster the network processes a transaction. Usually, the Ethereum blockchain requires 21000 Gas, or around 0.002 ETH at the moment of writing to process a simple transaction. But when it comes to a smart contract of an application, the fee can be much higher. Another drawback is that the growth of the ETH to USD rate can amp up the transaction price.

ETH has several advantages over Bitcoin. Its issuance is not limited like in BTC. As for the Ethereum mining algorithm, ETH uses the Ethash method. As a result, the block processing speed is faster.

However, the main advantage of Ethereum over Bitcoin is functionality. Bitcoin can only register transactions. The capabilities of the Ethereum blockchain cover numerous spheres from document flow processing to financial services.

Ethereum and the Boom of ICOs

The Ethereum network has laid the foundation for many other crypto coins. Back in the day, ETH was the main platform for the creation of other cryptocurrencies running Initial Coin Offerings (ICOs).

The boom of ICOs happened in 2016-2017, when almost every token sale succeeded. Here are a few popular ICOs and how much funds they raised:

The ICO market was flooded with scams and fake projects. As a result, the interest of investors decreased by 2018. Most crypto projects couldn’t reach even the minimum amount required for the development.

Dapps are applications based on blockchain technology. They differ significantly from other types of software, like Windows or Mac OS. These apps don’t have a centralized server and operate by interacting with the blockchain. Decentralization makes these apps more difficult to hack and provides more transparency for financial services. Given the decentralized nature of these applications and blockchain data protection mechanisms, dApps potentially have many different use cases, from gambling to financial applications.

Here are some of the most interesting dApps found on Ethereum: 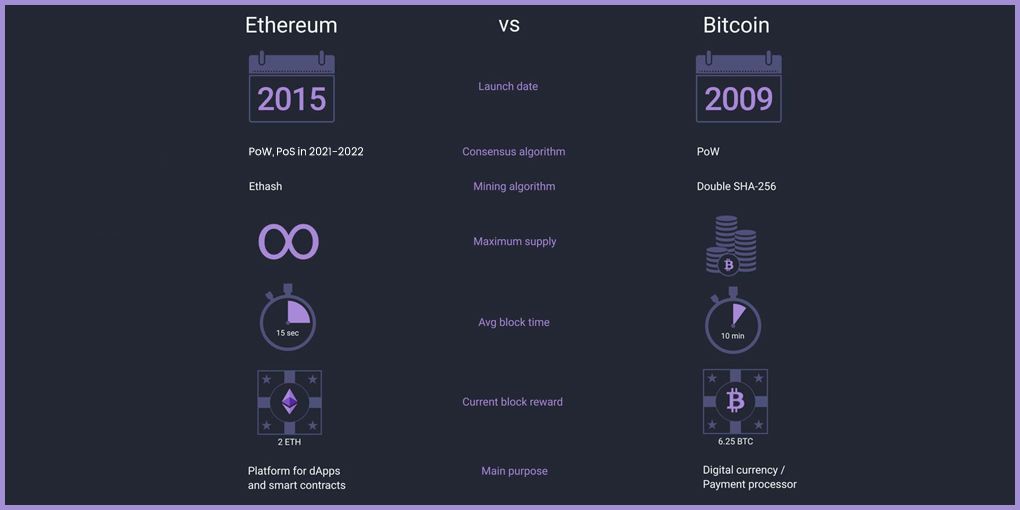 Despite having a faster network than BTC, Ethereum’s transaction speed is still far from perfect. Currently, ETH blockchain can process 15 transactions per second (TPS), which slows down massive adoption of the network. Thus, the team decided to increase the network capacity to 100,000 TPS with a significant upgrade – Ethereum 2.0. Ethereum 2.0, also referred to as Eth 2.0 or Serenity, has been in the works for a long time. Its various phases are aimed at not only improving the network’s speed, but also increasing its scalability, and security.

The new version of the network includes:

The second phase, dubbed The Merge, involves, as the name denotes, merging the Beacon chain with the Ethereum main-net. With its launch, scheduled sometime within the first half of 2022, staking will become possible throughout the network. It will simultaneously mark the end of Ethereum’s implementation of the PoW consensus mechanism.

The final phase before Serenity is the release of shard chains. Phase 2 is aimed at increasing the network’s capacity to process transactions and retain data by introducing sharding. This entails distributing operations across 64 new chains rather than running it all on a single chain.

Ethereum’s big upgrade will see its algorithm changed to a more accessible, faster, and sustainable Proof of Stake. PoS is a consensus algorithm where validators (miners) stake a part of their coins to get the right to mine the next block and validate transactions. The bigger their stake, the bigger is the reward.

Most of the activity and smart contracts continue to operate on the original Ethereum network, which runs in parallel with ETH 2.0. The developers can move their apps to an upgraded version of the network but not vice versa.

Apart from the 3 major phases, the Ethereum 2.0 roadmap has other changes of varying degrees lined up for the network, which include hard forks. A hard fork occurs when major upgrades are made resulting in a temporary or permanent blockchain split. Hard forks could be planned or the chain could divide into 2 possible paths when an agreement cannot be reached.

Hard forks are rather radical changes to a blockchain as once they happen, older versions of the blockchain are rendered obsolete. Ethereum has undergone several hard forks, the most significant being the DAO fork which occurred following the infamous DAO attack in 2016.

After 3.6 million ETH was stolen through a faulty contract, the Ethereum community voted on the next step. About 85% of the voters opted to fork and the minority that chose not to went on to establish Ethereum Classic.

Since Phase 0 of the Serenity rollout went live, 3 hard forks have occurred with 1 more still intended for launch in 2021.

The first was the Berlin hard fork. This was implemented on April 15, 2021, and comprised 4 Ethereum Improvement Proposals or EIPs. EIPs can be brought forward by anyone in the ETH community and these were designed to adjust the gas costs and introduce new transactions.

EIP-2565 which uses an algorithm to lower the fees for a particular set of transactions.

EIP-2929; with this proposal, the gas fees for “opcode” transactions were increased. EIP-2929 resolved the problem with denial of service attacks Ethereum had experienced in the past due to those transactions.

EIP-2930; Based on EIP-2718 this proposal introduces a type of transaction that enables users on the network to design future templates for complex transactions to reduce gas prices and aid processing.

The Berlin hard fork set the stage for the London hard fork which was released on August 4 this year and contained 5 proposals. All 5 EIPs were deliberately chosen to tackle specific problems in the Ethereum blockchain.

The most significant EIPs of the London hard fork were EIP-1559 and EIP-3554. The first restructured the fee system by enabling users to set transaction costs by choosing 3 bid options provided for ETH transactions. It was predicted that EIP-1559 would drastically lower the inflation of fees alongside introducing a base fee.

Another major feature of EIP-1559 is that it reduces the number of ether coins in circulation thus making Ethereum into a deflationary asset, allowing its purchasing ability to increase as time goes on.

EIP-3554 dubbed “The Difficulty Bomb Delay” put the ETH mining difficulty on hold till December. Once the difficulty bomb is launched PoW mining will be inoperative thus smoothing the switch to PoS by making mining less attractive to ETH miners.

After the London upgrade went live, the Ethereum blockchain recorded a 9% rise in chain capacity. The Difficulty Bomb is however not expected to launch soon, after Ethereum revealed another update will push back implementation of the Bomb Delay by several months.

The third and most recent hard fork undergone by the Ethereum network is the Altair upgrade. Altair is a huge step towards introducing PoS to the entire network, the first update to the Beacon Chain since it was released in December last year. Altair brings the proof of stake system to Beacon before it merges with the Ethereum main net in 2022.

Furthermore, Altair also brings 2 key features to Ethereum; support for “light clients,” like mobile phones for transaction verification which promotes decentralization. The other new feature was raising penalties for inoperative nodes. Stakers who have to put down a minimum of 32 ETH towards the PoS system need to remain active or their stake will be cut down.

The next hard fork, Arrow Glacier is due today. Once the upgrade is launched by Wednesday, December 8 this year, it will delay the Ice Age difficulty bomb for several months.

As the difficulty bomb will only disturb PoW networks, the decision was made to put it on hold until June and test out the transition to PoS on the Ropsten network.

Once Serenity is fully implemented several changes will be brought onto the Ethereum network. From making ETH more eco-friendly to improving scalability and security. There’s a long way to go but until then the PoW system carries on.