Tomorrow Ethereum will introduce its Altair upgrade, which is designed to bring it one step closer to its debut as a Proof of Stake network.

For those of you who may be – understandably – out of the loop in terms of what this latest upgrade means for the Ethereum network and its participants, we’ve got you covered. In this article, we are going to do a simple breakdown of the Altair upgrade and give you all the information you need to know about it.

Proof of Stake Draws Near

First off, in order to make sure that we are all on the same page, let’s start with some key background information. For a long time now, Ethereum has been preparing to transition from a Proof of Work model to a Proof of Stake model. Historically, Ethereum has operated in a similar fashion to Bitcoin, as a Proof of Work network. What that entails is that in order for the network to function properly – in order for transactions to be verified and for new coins to become available – miners have to solve complex mathematical problems. For their work, miners are rewarded with new coins and the network is able to operate. 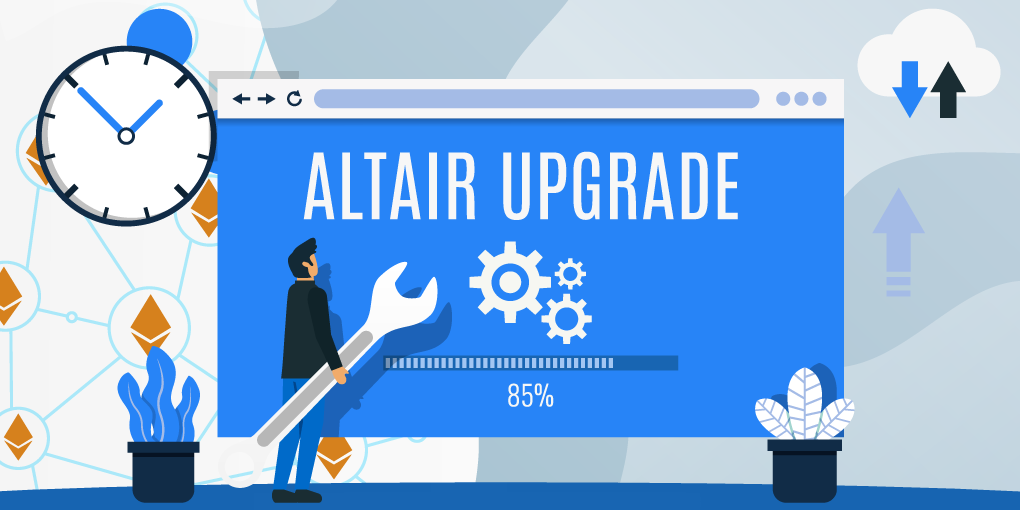 For a while now, Ethereum has been planning to move away from this model in favor of adopting a Proof of Stake mechanism. In contrast to Proof of Work, Proof of Stake doesn’t use miners to verify transactions. Instead, the network relies on validators. Validators can be anyone who is willing to stake the minimum amount of network currency necessary to occupy the position. Like their mining counterparts, validators will receive rewards for the key role they play in the operation of the network.

The reasoning behind the switch is primarily two-fold. On one hand, cryptocurrencies have been under a lot of pressure for the amount of energy that is expended by their use. In the early days, mining was a low-key activity. Anyone with a basic computer could mine and get rewards back before Bitcoin rose to the profile it enjoys today.

Now, mining is a huge, billion-dollar industry that only the wealthy and big corporations can really participate in. And the amount of energy required to run a mining operation is massive. Considering the current mining situation, Ethereum’s move to a PoS system is a transition to a more sustainable and egalitarian operational format. Although the amount of ETH needed to stake may be substantial, it currently makes becoming a validator more viable than opening up a successful mining operation.

Altair is one of the final updates necessary to set the table for the rollout of the PoS system. Altair has been labeled the first mainnet upgrade to the Beacon Chain. The Beacon Chain is the new version of the Ethereum blockchain, or Ethereum 2.0, which will function as PoS. The Beacon Chain was first launched a year ago, back at the end of 2020.

The Altair update accomplishes a couple key things that are necessary before Ethereum 2.0 is fully unveiled. The London hard fork occurred in August of 2021 and brought with it the actualization of the EIP 1559 proposal which introduced deflationary measures aimed at lowering the circulating supply of Ethereum over time. This time around, the Altair upgrade is taking aim at the validation process itself. Central to the upgrade is the introduction of punitive measures against validators who do not act in good faith or fail to fulfill their responsibilities.

The penalty for failing to fulfill one’s duties as a validator will be the negative equivalent of the amount the validator would receive as a reward for performing their function properly. The goal of introducing penalties of this sort is to shore up any potential vulnerabilities there may be in the PoS consensus protocol before it is fully and irreversibly launched. In addition to that, the Altair update also introduces light client support among other things. Light clients are key pieces of blockchains that allow users to interact with networks without having to sync with the entire network.

What the Altair Update Means for Regular Ethereum Users

If you’re wondering what this update means for the average end-user of the Ethereum network, or the average ETH holder, the answer is very little. At least for now. The changes introduced by the upgrade exclusively concern the upcoming deployment of Ethereum 2.0. Altair is very significant, especially if you are a validator or you plan to become one. By putting punitive measures in place, Altair has further solidified Ethereum’s PoS consensus mechanism and hastened its arrival.

Altair is scheduled to get triggered into action at epoch 74240, which is set to occur on October 27. Once Altair goes into effect, Ethereum will be on track to unveil Ethereum 2.0 sometime towards the end of this year or the start of 2021.

As a holder of Ethereum or a user of the network, the changes introduced by this update will have little effect on your day-to-day operations. However, the rollout of Ethereum 2.0 is considered by many to be the next big event in the world of cryptocurrency. There has never been a consensus protocol shift on this scale. Ethereum is by far the second-largest blockchain in the world and the network on which DeFi by and large operates. As we get closer to the launch of Ethereum 2.0, it is likely that there will be a lot of hype surrounding the cryptocurrency and the network and this could very well influence its price along with the network’s speed and cost of operating on it.

In the meantime, however, business will go on as usual. The Altair update will cause no interruptions to Ethereum related services on ChangeNOW. Users looking for a convenient way to buy, sell, and store Ethereum are encouraged to check out ChangeNOW’s quick and reliable exchange features along with the multitude of comfortable and secure storage options that the platform offers.