Decentraland is a virtual reality platform based on blockchain. The main focus of this project is to give control to its users by buying non-fungible token LAND, representing ownership over a part of the Decentraland. It’s similar to having your virtual world where you dictate all the rules. The owners decide how their LAND behaves, they moderate the content, policies, auctions, etc.

Decentraland is a virtual reality platform based on blockchain. The main focus of this project is to give control to its users by buying non-fungible token LAND, representing ownership over a part of the Decentraland. It’s similar to having your virtual world where you dictate all the rules. The owners decide how their LAND behaves, they moderate the content, policies, auctions, etc. MANA is Decentraland’s fungible ERC-20 token, which runs on the Ethereum blockchain. MANA can not only be used to buy LAND and other resources on the Decentraland but acts as a cryptocurrency which can be traded freely on the market. Its connection with Decentraland makes it even more valuable as experts have a positive decentral and projection because of its increasing popularity. This popularity will translate to an increased demand for Mana and its price could skyrocket. By making proper Mana coin predictions, prospective investors could buy-in at the right time and avail of the unique virtual token.

Decentraland was proposed through a white paper in 2017 and raised $25 million in its Initial Coin Offering (ICO). Headed by an Argentina based team, it is the first virtual world working on blockchain. It is similar to the already famous virtual reality worlds, Minecraft or Second Life. But unlike them, Decentraland works on a decentralized system without a central server. Decentraland has its economy where the users can create content, applications, games, and even monetize them. The developers show pride over the fact that even if they remove the Decentraland Organization, the team which decided the initial rules and laid the foundation of the game, the world would still go on. It now runs a Decentralized Autonomous Organization or DAO, a committee that proposes and votes on important matters relating to policy changes. It holds the voting through a governance platform powered by Aragon. Decentraland as a virtual world and decentraland forecast determines a lot of the Mana exchange taking place on the platform and directly impacts Mana projection.

Mana Coin Prediction — What Does It Depend on?

The price of any market traded object depends upon several factors. We develop a Mana coin price prediction based on a few of these aspects which affect its cost and use fundamental analysis for it. Before jumping directly onto the numbers, let’s analyze the constituent we deem the most important:

Similar to any share or commodity on a stock exchange, the supply and demand play a major role in determining the market price of Mana. If there is an increase in the demand for Mana, without a corresponding increase in the supply, the price would go up. With the increase in popularity of Decentraland, Mana would be more in demand and could increase in price. Coinbase has a heavy investment in Decentraland’s early development and has a positive Mana stock forecast. However, a total of 1.3 billion Mana coins are in circulation out of 2.6 billion. Out of the total, about a billion are yet undistributed while the rest is owned by early backers and community partners. Hence, close to 38.5% of all Mana coins are yet undistributed. Once these coins come into the open market, there could be a surge in supply and if it is not matched with demand, then the prices would fall steeply.

Perhaps the most lucrative factor about Mana is its connection with Decentraland. To buy any assets or non-fungible tokens such as LAND, wearables, energy, etc. on Decentraland, a user needs to purchase Mana. As more users start using Decentraland, the prices of these assets would increase, and the consumers would need to use more Mana. Hence, even if new assets are not generated and the existing ones trade freely in the market, the cost of NFTs would increase, and more Mana will be demanded.

Cryptocurrencies, in general, are banned in a few countries around the world. The new disruptive nature of blockchain technology, lack of regulations as well as the unstable cryptocurrency prices are partly to blame. However, as the blockchain technology matures and cryptocurrencies become mainstream, many countries would need to cede their previous stance in the name of progress, and Mana would be available to a much wider range of consumers. The increased market would lead to better global penetration and an increase in the price. Some other factors such as the general sentiment around cryptocurrencies, its utility, security, and the performance of competing cryptocurrencies affect the Mana coin stock forecast.

Before moving to Mana prognosis, we present a brief overview of the coin’s performance over the years. The current market cap of Mana is $110 million with a market price of $0.0762 as of 9th September. Below is a historical chart with Mana’s price since its inception. We can see that Mana peaked close to $0.25 in January 2018, but since the beginning of 2019, it has hovered around $0.05, peaking around $0.1 in September 2020 and holding fort between these low and high respectively. There is also a large surge in volume in August and September 2020. A part of this increase was attributed to its partnership with Samsung, where the latter added Decentraland Marketplace on its wallet app.

WalletInvestor doesn’t have a very positive Mana forecast. They believe that the market price in 5 years (i.e. 2025) would be 0.0759, which is a 0.4% decrease from the current market price. According to them, investments in Mana show a stable outlook but with a low possibility of growth.

The Crypto-rating uses an advanced technique known as a Cryptocurrency Volatility Index (CVIX) for Mana price prediction. Most cryptocurrencies are known for their volatile nature as they present an opportunity to earn unprecedented growth in investment. However, the downside is that you might lose your hard-earned money too. The best strategy suggested by crypto-rating is to use buy and sell triggers to take advantage of sudden fluctuations.

Perhaps, the crypto round has the most positive outlook for Mana prediction. It expects the coin to increase in value gradually up to its all-time high of approximately $0.25 by 2025. They believe that Mana will fall a little in value in 2021 but would see an increasing trend thereafter.

TradingBeasts use an inferential regression tool to work out the possible Mana coin value, given that the trend stays the same. According to it, the Mana coin is expected to increase by about 20-25% each year. The decentraland forecast for the future as a long-term investment seems bright. In 2021, it is expected to be anywhere between $0.038 to $0.218, more probabilities on the upside. In 2022, it is predicted to stay between $0.108 to $0.261. Subsequently the expected price for 2023 and 2024 are predicted to be $0.278 and $0.311 respectively along with $0.352 by the end of 2025 in the best scenarios. Nevertheless, the conservative predictions also point to a value of $0.250, which would be a 228% absolute growth from the current price.

Where to Buy Mana? 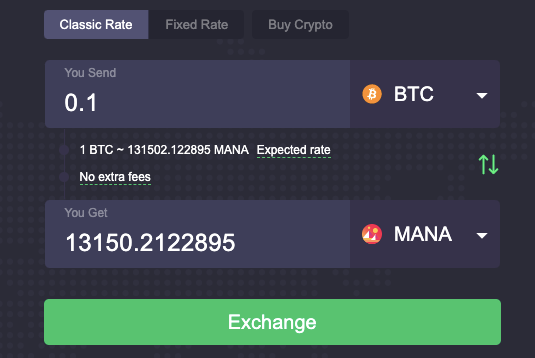 Surely this article would have ignited your curiosity to know more about Mana coin analysis or you might be interested in buying this cryptocurrency. Well, we have got you covered for the later. You can head on to the “Exchange” tab on ChangeNOW and obtain Mana by exchanging most other cryptocurrencies such as Bitcoin at no extra fees. You just need to provide us with the amount you want to exchange and your wallet address, we will take care of the rest. And did you know that you can store all your Mana coins in any of the Ethereum based wallets!

Cryptocurrencies have broken barriers in the financial industry, especially by eliminating the need for a central bank to guarantee fiat currency. They can absorb large shocks, and country risk cannot change value drastically. Mana analysis provides future investors with essential information and predictions, however, these projections are not investment advice, and an investor must use discretion while purchasing Mana.