Harmony and Zilliqa continue on a bearish momentum while Stepn’s GMT will not rest its laurels yet. Despite GMT’s continued run, KNC makes the most impression.

This past week created low excitement in the market as the market closed with more minor gains than many midterm holders would have expected.

Kyber Network Crystal (KNC) had the most impressive run this past week, leading the pack in a low activity week for the crypto market. After the Easter Holiday was over, as soon as Wall Street resumed trading activities, Bitcoin went down by 7.15% compared to the previous week's closing price and has reached $37,700 twice. This means the general bearish trend is still strong in the market. Also, the Fear and Greed Index of the crypto market is currently in the "extreme fear" position.

Moreover, the bullish run of the USD is believed to be a significant factor in the continuous downtrend. The US Dollar Index (DXY) recorded new highs it last set reached in March 2020. Other fundamental factors are the resumed Covid-19 lockdowns in China and the continued geopolitical tensions in Europe. 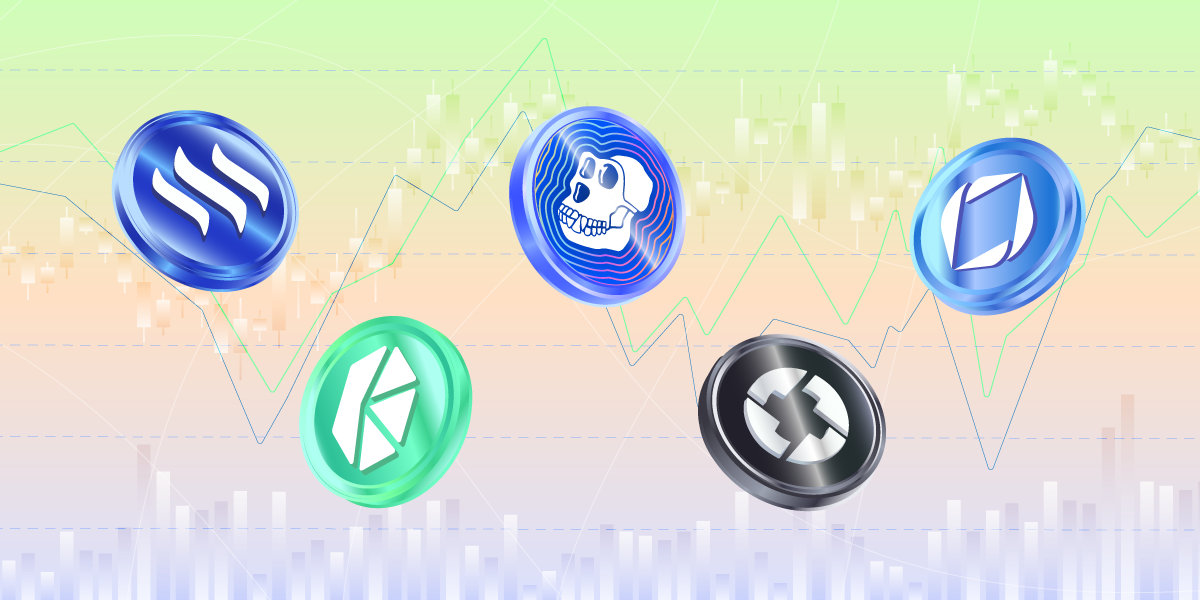 Top Performers This Week: APE, GMT Still on the Move

Kyber Network Crystal has increased by 29.88 % in the past week, setting an ATH in the early hours of Tuesday.

KNC now trades at 0.35% below its all-time high of $5.65. KNC is the utility token to DeFi market maker Kyber Network. The quickly rising network aggregates liquidity from various sources and offers its market-making services to dApps, DEXs, and several liquidity pools.

April has been a good month for KAVA. The Layer-1 blockchain token has been on an upward trajectory since the second week of April. One reason for this is the forthcoming launch of Ethereum and Cosmos co-chains. Opening the week at $4.15 and closing at $5.15, KAVA sustained its momentum this past week, gaining 25%.

ApeCoin continued its resurgent run this past week after an initial downturn following its launch. The Bored Ape affiliated coin gained 19.49% this past week and currently trades at $19.24.

While APE was down 4.64 percent in the early hours of April 25, it recovered and rallied the remainder of the day to post a 15.13 percent gain. Soon after, the cryptocurrency had an 8.61 percent fall, bringing the 24-hour surge to a halt at barely 7%. APE has performed remarkably well since its unexpected fall to $9 a day after its launch. Within the past two weeks, the much-anticipated token managed an 82.32 percent increase, from $10.65 to a high of $19.3.

GMT, the move-to-earn token, isn’t losing steam just yet. It has been on the move since March and continued its bullish run this past week. Opening the week at $2.4, GMT hit a $3.7 resistance, before closing the week at $3.4. Although there are concerns about the project’s sustainability, STEPN is proving itself as a digital incentive for healthy living. Recently, the team announced that they are taking steps toward carbon neutrality as they purchased $100,000 worth of Carbon Removal Tonnes.

Coinbase’s announcement of its planned integration of the 0x protocol into its new NFT marketplace was all the token needed to surge instantly by about 12% to reach the $1.10 mark. It is the coin's highest price level since December. Since then, ZRX has increased by more than 20% in the past seven days. ZRX also made the list of the top 100 cryptocurrency tokens after its market capitalization increased from $300 million to $930 million.

Last week, the launch of USN, NEAR Protocol’s stablecoin, caused NEAR to experience a price surge. However, it was unable to sustain this upswing due to the overall bearish sentiment of the market. NEAR started the week at $16.1, surged to $17.3, and closed at $15.1, accumulating a loss of over 20% by the end of the week.

This is not the first time the coin has failed to sustain a price rally after a major event. Two weeks ago, NEAR hit $19.64 after receiving a $350 million fundraise. However, it dropped to $16.21 within 24 hours.

The market's latest downtrend has resulted in Harmony’s ONE losing nearly 45 percent of its value (from March 31) till it reached a 33-week low on April 27. It is one of the most considerable losses among the top 100 cryptocurrencies.

Since breaking out of its last down-channel, bulls have struggled to continue a rally above the $0.13 level. As a result, ONE lost its critical $0.1-mark support, which was converted to resistance by sellers. Now, bulls must defend the $0.09 level to avert more losses.

ZIL traded as high as $0.22 at the beginning of the month following the launch of a Zilliqa-based metaverse project, Metapolis. Ever since that rally, ZIL has been on a losing streak. Its highest trading price this past week was $0.14 which later fell to $0.10 by the end of the week.

The Ronin hack has been AXS’s bane for about three weeks now. Also, the bearish market is another chokehold for the coin. Even though some of the stolen funds have been recovered, it may seem as though investors are still playing safe. Axie Infinity's price has decreased by 16.75 % in the last seven days. It opened the week at $46.15 and closed at $44.61. As at writing, AXS was trading at $38.53.

Despite the unfortunate hack and the steady price drop, there may be a sliver of hope for the gaming token. Its roadmap holds some exciting features for 2022 such as land gameplay and the release of Axie Infinity on Android and iOS.

There have been times in the crypto market where altcoins rally amid Bitcoin’s bearish momentum. This is not the case at the moment. Altcoins can barely get their heads up even with some strong fundamentals. The story is different though for coins like GMT, APE, and KNC.

While it isn’t certain when the bulls will overpower the bears, the market is optimistic that there could be an astronomical rise in the value of cryptocurrencies once the bear season is over.