Four crypto platforms made dominating appearances during Sunday’s game, with Binance the only major crypto figure missing. Coinbase, FTX, eToro, and Crypto.com all spent millions in the last Super Bowl event to attract a mainstream audience.

Coinbase adopted a simple advertisement scheme during the break, piquing an overwhelming response from the viewers. Soon after Coinbase’s ad aired, its website crumbled under the weight of traffic from visitors. 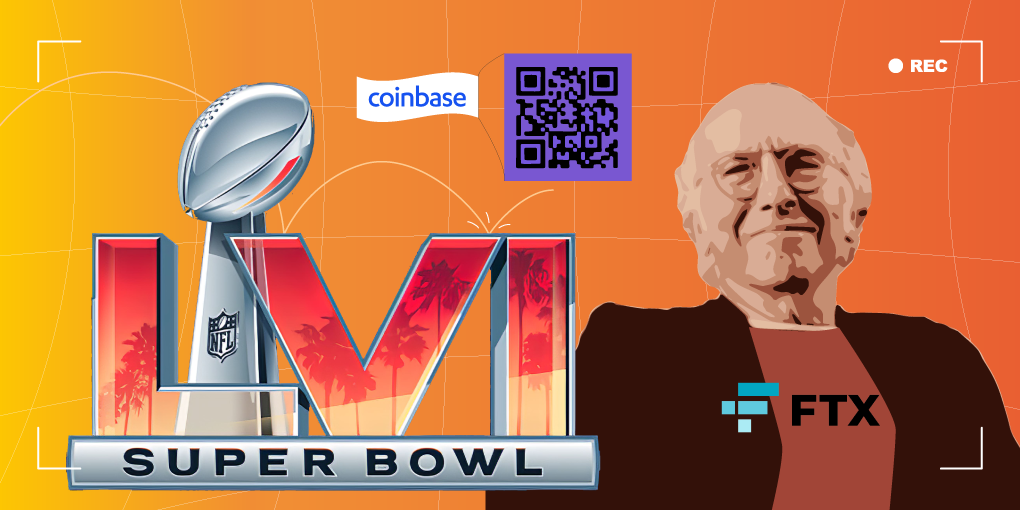 The advertisement neither possessed lush theatrics nor a bold representation of the brand's name. During the 60-seconds of Coinbase’s advertisement, a minimalist display of a QR code linking to its promotional website floated around the spectator's screens, bouncing off edges. The strategy was reminiscent of the default standby display of the “DVD player”.

Unlike others that generated publicity regarding their enlistment of major stars, Coinbase gave no inclination it was taking a slot in the massive spot event. Coinbase’s minimalist QR code ad is reported to have cost about $13 million.

Major crypto exchange FTX also featured on Sunday’s Super Bowl commercial, airing towards the end of the game's first half.

Amidst the difficulty surrounding the production of its compact Super Bowl ad (partly due to scheduling issues and COVID strict protocols), the production team broke through and rendered an inspiring act on Sunday.

In the ad, Larry rudely dismisses some of the grandest human inventions. He expresses his reproach for Thomas Eddison’s light bulb, the declaration of independence composition, and the wheel technology, one at a time with sharp critical remarks. In the final scene, Larry dismisses FTX like the rest, and the ad is concluded with a message urging viewers not to miss out on the next big thing.

FTX was not the only one with an A-list name. Crypto.com recruited the famous basketballer LeBron James, who delivered a moving speech on this ad.

In the commercial, LeBron James gears up a younger version of himself with words that advised on snatching opportunities and taking risks. The scene is set in young LeBron’s bedroom, back in 2003 and the soon-to-be NBA superstar is amazed at recent technology advances whilst doubting his readiness for the big leagues.

eToro’s had its first-ever Super Bowl ad, in a symbolic display that represented the social nature of the trading company’s offerings. The ad came on during the game’s first half.

During the 30-seconds ad, a hovering constellation of people pulled to themselves potential customers on the ground, and discussed trading options as everyone floated along towards the skies. The ad is interpreted as a depiction of the community provided on eToro, where new and established traders can find support.

The increasing presence of the crypto industry in sports further emphasizes how mainstream the industry is becoming. What is more, it shows that crypto platforms possess significant financial muscle, especially considering a Super Bowl ad placement costs about $10 million. In the near future, it would be no surprise if more crypto platforms took the global sporting event by storm.