Civic Coin (CVC) is the cryptocurrency behind Civic, a wallet in addition to a method of verifying your identity. The project relies on cutting-edge technology to verify your identification while also protecting the transfer of your personal information. With Civic, you verify your identity a single time and do not need to repeat the process. In the future, you can use this identity verification for other KYC/AML requirements.

What Is Civic Coin (CVC)?

The CVC token makes it possible for Civic to provide low-cost and secure identity verification relying on the blockchain. The original token sale in 2017 raised $33 million for the project. The Civic Coin is an ERC-20 token and, as such, it utilizes the Ethereum blockchain. The Civic platform is free and readily available to the public. There are some small fees for certain transactions with digital currencies, as well as small fees for buying digital currencies. At the time of writing, Civic Wallet supports USDC, ETH, BTC, and CVC, with plans to expand support to include other currencies. Civic Wallet also has a $1 Million USD Cryptocurrency Protection Guarantee due to its insurance policy with Lloyd’s of London as the underwriters.

Civic Coin Price Prediction — What Does It Depend On?

The Civic Coin projection outlined below is based on the analysis of a range of factors since the price of cryptocurrencies does not exist in a vacuum. Supply and Demand As with any cryptocurrency, the pricing depends largely on supply and demand. If the demand for CVC increases without a corresponding increase in demand, the price would rise. The demand for the coin would increase if Civic increases in popularity. Given the solidity of the project, combined with its trusted partner network, most Civic Coin forecast analyses view this possibility favorably. For reference, there is a circulating supply of 670 million and a total supply of 1 billion. Availability of Civic One more factor that influences the CVC price prediction is where the Civic Wallet is available around the world. Currently, there are just over 40 countries whose residents cannot use Civic Wallet. This is only a small portion of the world. Additionally, the project already has team members in Germany, Brazil, South Africa, and the United States, demonstrating a reach that spans four continents. That is favorable news for the future of Civic and its token. Other Factors That Affect All Cryptocurrencies In addition to the above factors, there are numerous price influences that Civic Coin shares with all other cryptocurrencies. These include:

All of these factors were incorporated into the predictions mentioned below, and you should account for them in your own analysis, as well.

Before getting into the Civic Coin price prediction, take a quick look at the current price. This will provide a basis for comparison. At the time of writing, CVC was valued at $0.043573 USD. The following chart shows the price fluctuations throughout the coin’s history, starting around September 2017. The current market cap is $27,433,931 USD. [caption id="attachment_5178" align="alignnone" width="570"]

(Source: https://coinmarketcap.com/currencies/civic/)\[/caption\] With that in mind, you can see that the value of CVC has hovered around the same point for more than a year, although it had previously reached $1.28 on Jan. 3, 2018, during the crypto peak. With that context in mind, we are ready to explore the CVC forecast.

Remember that all of the predictions are based on reports from opinion leaders, along with facts and market analytics. These are solely predictions, not financial advice. Industry experts seem to agree that the CVC prognosis is strong and the currency will increase in price. The most common CVC projection is around $0.045 to $0.055 by the end of 2020. Although this is a small numeric increase in value, it would be a moderate increase in terms of percentages. After all, the current price is $0.043573.

Making Civic Coin predictions for the long term, such as five years into the future, is more complicated, as the further into the future we look, the harder it is to predict the market. Nonetheless, market analytics points to a positive CVC stock forecast. The further you look into the future, the greater the variation in CVC predictions are, although the consensus is that it will keep rising. Predictions for 2025 range from $0.17 to $1.55, with many opinions placing it firmly in the middle of these two figures. Even the lower of these two figures would indicate dramatic growth compared to the current $0.045 price. For those interested in the CVC analysis in the intervening years, predictions go from around $0.063 to $0.091 in 2021, $0.067 to $0.635 in 2022, $0.70 to $0.841 in 2023, and $0.085 in 2024.

Where to Buy Civic Coin? 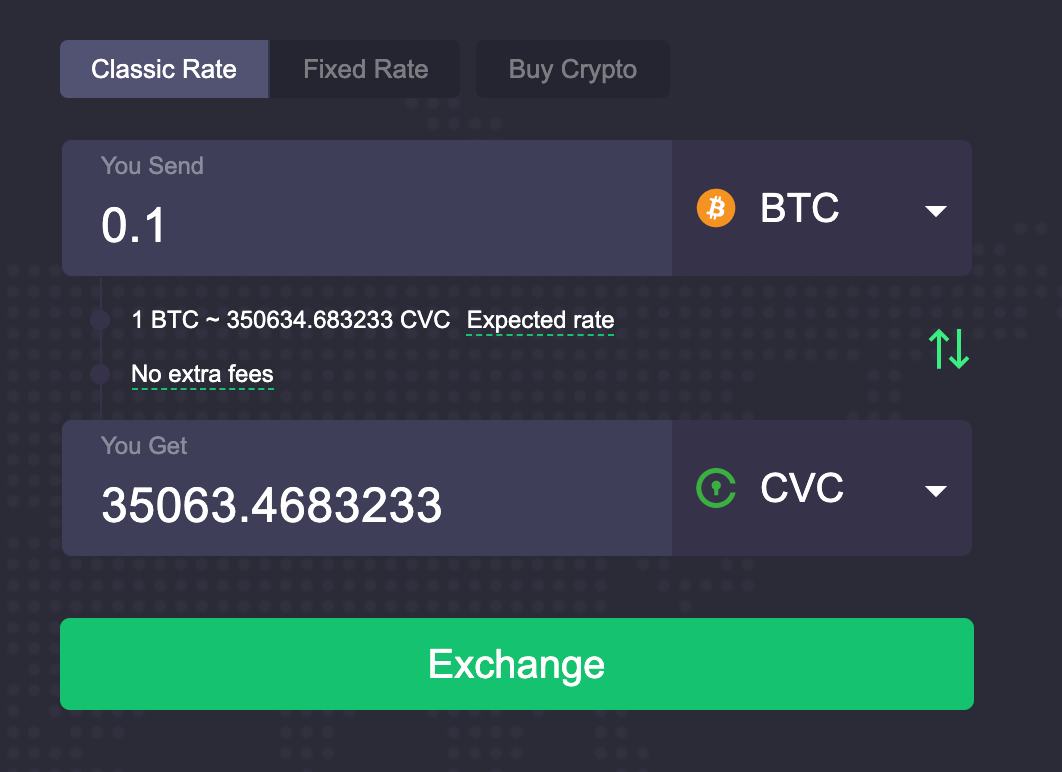 If the Civic Coin stock forecast piqued your interest, you may wonder where to buy CVC. There are a growing number of options, but ChangeNOW offers one of the simplest experiences, with support for more than 13,000 pairs. To buy CVC on ChangeNOW, choose to buy CVC in the drop-down menu. From there, you can launch the exchange and choose details. This includes the currency you would like to exchange for CVC and the quantity to exchange, along with your wallet address.

Based on market analytics, industry experts are in agreement that the Civic Coin prognosis is strong. Although it is impossible to tell exactly how much it will rise, it is likely to experience steady growth within the next five years, with even conservative estimates predicting a quadrupling in its value. You should always conduct your own Civic Coin analysis to supplement the information we reported. Take similar precautions for any cryptocurrency you choose to invest in as a way to reduce your risk.