Bitcoin and other coins are on the rise in the past few days as crypto continues to be a major tool in the Russian-Ukrainian war.

The crypto market’s surge also coincides with the rapid fall of the Russian Rouble, which dwindled by more than 30% in the past week, before regaining some of its loss. As a result, Russia's financial sector is reported to be in a state of alarm, as several local bank customers pull out their funds amidst sanctions and SWIFT exclusion. The stampede of withdrawals from Russian financial institutions is tied to the announcements by the European Union to alienate Russian banks from the SWIFT network.

With crypto playing a major role in the thick of conflicts, this week’s resurgence in price effectively wipes out last week’s dip. According to data collected from Coinmarketcap, Bitcoin now trades at $44,140. 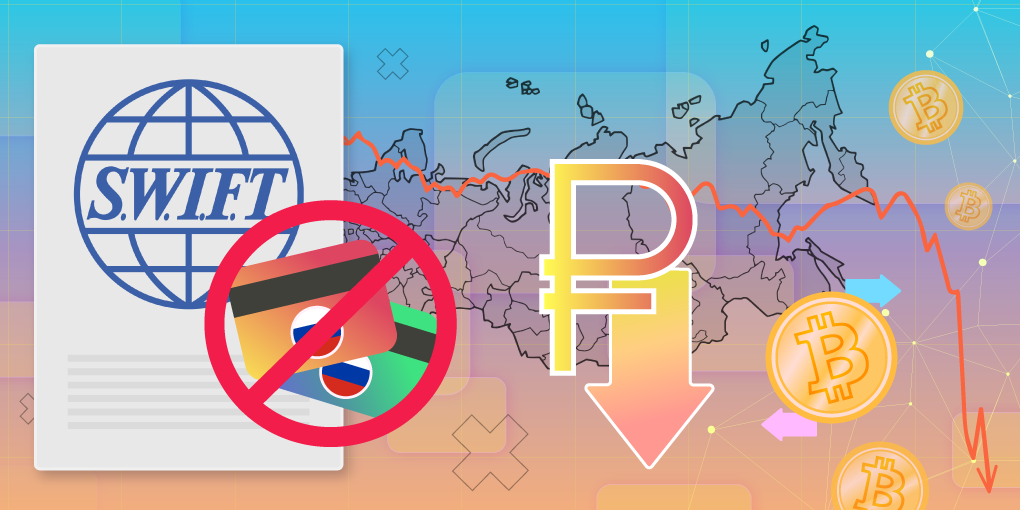 Impact of Russia’s Ban from SWIFT

Society for Worldwide Interbank Financial Telecommunication, abbreviated as SWIFT, is a globally-scaled payment platform offering seamless intercontinental money transfer. The SWIFT organization is located in Belgium and comprises a network of 11,000 banks in more than 200 countries. Initially founded by banks in Europe and America, it has evolved over time to be operated by over 2,000 financial institutions.

It is managed by the National Bank of Belgium, the US Federal Reserve, the Bank of England, as well as other prominent banks across the globe. While SWIFT’s ban affects most Russian banks, two of its biggest – Sberbank and Gazprombank – have not been included. This is because the two are the major channels for payments for Russian oil and gas, which EU countries are still buying. However, an EU official noted that the two banks have been subjected to other punitive measures.

Additionally, the recent sanctions intend to deprive Russia of important sources of revenue generation such as the trade of agricultural products and energy service with countries over its border via SWIFT. According to the European Union, the ban will "ensure that these banks are disconnected from the international financial system and harm their ability to operate globally".

As a result, Russian banks would have to settle for a slower, more expensive direct communication with foreign banks. Back in 2014, the EU threatened to remove Russia from the SWIFT network for the annexation of Crimea. Russia made it known that the implementation of the threat would be interpreted as an act of war. Even though the EU and its allies eventually didn't eject Russia from SWIFT, the Russian government took the threat as a signal to develop its own international transfer network.

To protect the country from such sanctions, a National Payment Card System was created for handling card payments, but it only saw minimal adoption.

There are evident suggestions that Russia might be turning to crypto to circumvent sanctions, or at least to mitigate it. With crypto being decentralized and ungoverned, it would be difficult to exclude Russia from making most of its transactions in crypto instead.

Last week, there were calls for Russian digital assets to be frozen, but crypto exchanges refused the suggestions, citing that freezing digital assets undermined the ethics behind cryptocurrencies in the first place.

Thousands have also donated millions of dollars to the Ukrainian cause through crypto. At the time of writing, more than $35 million have been raised in crypto donations to Ukraine. On Wednesday, Ukraine Vice Prime Minister Mykhailo Federov announced that the country was now accepting donations in DOGE, Solana, and some other cryptocurrencies.