One thing we all like to do is speculate on the price of your favorite cryptocurrency. Today, we’ll have a look at ReddCoin, an innovative project that has been around for a couple of years now. The project has seen astonishing returns during the 2017 bullrun, but as of lately, like most alts the project has seen a downfall in price. Question is, what does the future have to offer for this project?

Let’s start off with a short overview of what ReddCoin is exactly. The project itself calls Reddcoin; The first social cryptocurrency. The project was launched in 2014 as a Litecoin fork that was transformed into the currency used for tipping on social platforms, or social content in general. This could be trough platforms such as Twitter, Twitch, Reddit and currently many other platforms.

Since the start, the project has successfully managed to create a designated wallet for the project, integrated the possibility to tip on platforms such as Twitter, Facebook, Twitch and Reddit and are exploring more features. One thing that’s interested is the opposed hardfork that’s currently in the works. It’ll include a transition to a system called ‘Proof-Of-Stake-Velocity-V2’ described in detail in their ‘Reddpaper’ that was released this month. As opposed to the POW (Proof of work) system that’s been around for more than a decade now where mining power buys you influence on the network, the POSv system is different. It requires users on the network to increase their holdings and remain active on the network and thereby validate transactions and mine blocks. An interesting and innovative system that should incentive both holding and spending of Reddcoin.

This system is combined with the ReddID browser extension that should allow anyone to tip any content creator all across the internet. It would require nothing more complicated than a username in order for you to send over the tips. Making it as easy as pressing the like button or making a comment.

Before we dive into the future for ReddCoin, let’s see what the analysts and speculators were saying about the price for ReddCoin in 2018. The year where in the beginning of the year, the price made an incredible jump and shown all time highs to levels it had never seen before. After that, price went down pretty rapidly and after a couple of jumps upwards, the price remained on the way down. Back in 2018, people were calling prices to raise up till $0,25. One thing that people did take into consideration was the recent moon-mission with a rise of 800% in just a couple of weeks. When we look at the charts, it’s safe to say that these speculations were false and price didn’t do what people expected it to do. Smart people took their profits while they could and the rest is probably stuck with a bag of ReddCoins. The big questions now is, what does the future hold for this project?

When we start looking forwards into the future, the big question that you can ask is; when alt season? That’s the question that many people are asking for the past couple of months. Basically, ever since the price went down of most alts is when people are radically calling for alt season to be around the corner. Will it ever come? Will we see these 800% jumps ever again or are we up for a long-term bearish future for most alts?

With future price predictions, technical analysis is a big thing. When looking at the predictions for ReddCoin in the upcoming period up to 2020 we’ll take a look at Tradingview. As you can see in the chart above, the trader here is expecting some great returns for ReddCoin. This trader is working with Bitcoin pairs instead of the ReddCoin usd price value, so it’s hard to tell what this’ll mean in usd value. Anyhow, the trader here is suggesting the price has seen its lowest point for the upcoming future and anywhere up to 1500% profits is thinkable. What this would mean in usd value is hard to tell, but in terms of Bitcoin we can say that around 50 satoshis is possible in the near future, meaning 2020.

For the prediction of 2021, it’s quite similar to what we have seen in the year of 2020 but then we zoom in a little more on the roadmap that’s ahead for ReddCoin. Problem here is, the current roadmap does not reach further than 2020. That being said, there should be an update to the roadmap before we can see the price catch up and we can base any predictions on this data. There are three indicators that I have found that are quite interesting and they mention a specific usd value to go with this prediction.

When we look at these predictions, it’s hard to tell which one of these is right and to which measurement we can compare the price of ReddCoin to evolve. One thing is for certain, if we follow these trendlines, price will not do these big jumps that we have seen in the past. 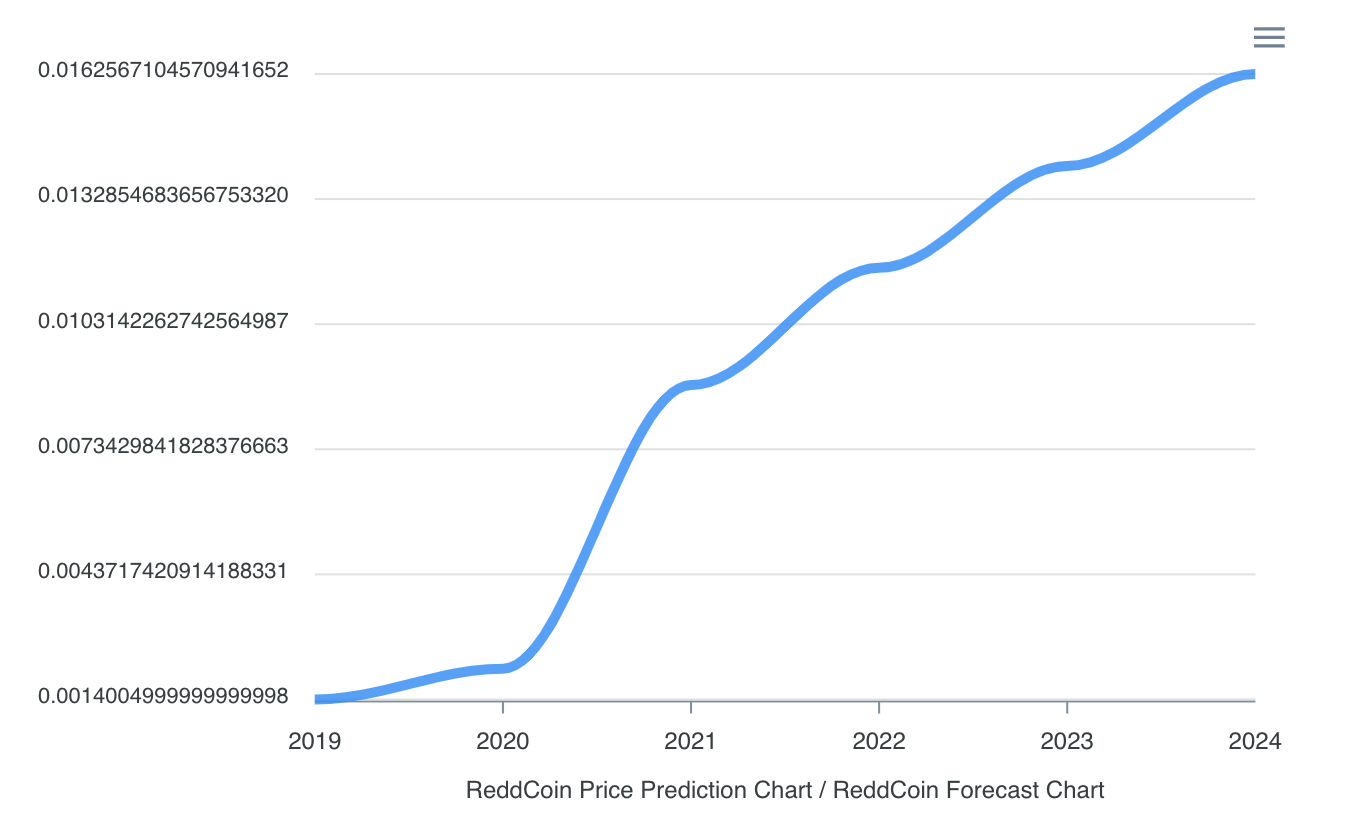 When we look further into the future it’s a bit more difficult to tell what the price will be doing. Most technical analysts do not look further than the upcoming months, but some of the models based on historical data do. When you look at the chart above it has a clear line upwards that’s reaching all the way up to $0.16. These are the more optimistic numbers and the numbers that wake up the moonboys and moongirls we are so fond of in the cryptocurrency community. We appreciate all of you and we wish to have you around for many more years. Now, let’s have a look at these three indicators again, now onto 2025.

What we can learn from this is optimism. We could see the Reddcoin price in usd value to rise all the way up to $0.1684 according to some statistics. Whether this will happen and if ReddCoin manages to go through the kind of adoption that Facebook did, then we are up for some fireworks, that’s for sure. We are excited to see what the future holds for Cryptocurrency in general and where we are in 2025. Will the mainstream adoption take place or does it take longer than ‘just’ 5 years? Let’s see what the future holds.

*This price prediction is based on the data collected from various sources. The information presented in this article should not be considered as any sort of investing advice and the reader should do their own research before taking any actions.