5 Hard Forks You Need To Know About

When a soft fork happens, the cryptocurrency blockchain software gets a minor update, and that’s it. In case of a hard fork, the updates to the blockchain also happen, but this time they are so radical that imply the creation of a new blockchain – while the original version stays intact. What is a hard fork? What are the 5 main hard forks that every crypto enthusiast needs to know about? Let's find out!

Before we get into what a hard fork means, let’s look at what... a fork even means. Your thoughts might immediately move to cutlery but you can rest assured this word means something very different in the cryptocurrency space. A “fork” happens when a change is made to the software or protocol of a cryptocurrency in the form of an update.

What is a hard fork?

When a soft fork happens, the cryptocurrency blockchain software gets a minor update, and that’s it. In case of a hard fork, the updates to the blockchain also happen, but this time they are so radical that imply the creation of a new blockchain – while the original version stays intact. Although the new version is born from the original one, they are not compatible and act separately. The reasons for such radical change might be adding new features to a blockchain, tackling the effects of catastrophic bugs or hacking, and others. Hard fork can be explained through the creation of a parallel universe. Let’s imagine there’s a universe with roads, drivers, and blackjack. If there was one driver who lived in Arizona and had a truck – then now there is an additional “Driver Cash,” who lives in “Arizona Cash” and has a “Truck Cash.” So, both drivers live separate lives in separate universes. And Arizona Cash driver will never be able to visit his counterpart or apply for a job in Arizona – there is no portal between the realities. Once a hard fork happens, two versions will be present, one old and one new with no possible means of communication between them. Conventionally, the upgraded version would have the transaction history of the old version but in the case of a hard fork, the newer version would have an entirely clean slate – in other words, its very own transaction history. This is a totally new blockchain with a totally new cryptocurrency. Now that we’ve covered what a hard fork is, let us delve into the 5 hard forks that you should know about:

Ethereum Classic didn’t always exist as its forking happened in an unexpected manner. In 2016, the split occurred after a fund built on Ethereum called “DAO” was hacked. Ethereum’s team had a choice either to accept the hack or initiate a hard fork. Initiating the hard fork would result in stopping the hackers from getting away with the money. When the time to vote on the change came, there was a rather huge part of the community that did not agree with this approach – their philosophy claimed that the Ethereum blockchain should remain immutable. So, when Ethereum underwent a hard fork to a different network, many were left behind. That was when Ethereum Classic was born.

Bitcoin Cash has to be the most controversial fork in Bitcoin history as there are tons of varying stories about how it got released. The year was 2017, SegWit was about to be launched – an update to Bitcoin blockchain to help shrink the file size of a Bitcoin transaction. This would allow more transactions to be approved each time when a block is verified. This created a lot of anger in the community between users that wanted the block size to be adjusted. This disagreement in the community led to the New York Agreement, which was supposed to be a compromise between the two opposing sides of Bitcoin – those who wanted a smaller block size and those who wanted a bigger one. The miners on the network agreed to cooperate with the SegWit implementation under the condition that the block size would at least be increased to 2 MB. This did not happen because the key figures rejected the New York proposal. Also, two massive mining pools (such as ViaBTC and Bitmain) felt that it would be in their best interest to help promote the hard fork the increase the block size. This is how Bitcoin Cash was created.

The Bitcoin Gold hard fork from Bitcoin initially took place on October 10th, 2017, and it also occurred on October 24th that same month. Like all the hard forks that came before it, Bitcoin Gold was received by all those who previously had their Bitcoin in a private wallet. The coin was deemed necessary by the community and the developers responsible for creating it because it was made in such a way that it was resistant to the ASICs (Application-Specific Integrated Circuit) reach which was bringing about the threat of centralization caused by a mining monopoly. Basically, the developers wanted GPUs to be the main method of mining coins because of the high cost that comes with using ASICs. It would replace the hard-to-use, costly, and technologically advanced ASICs that had been developed before. However, due to multiple tensions between the miners and the developers, as well as the fork’s controversial standing, the implementation of the hard fork itself failed to garner any substantial traction in the Bitcoin community.

Bitcoin SV is a fork quite of a fork. BSV is a hard fork established as distinct from Bitcoin Cash after the network upgrade scheduled for November 15th, 2018, resulted in a hash war determining the chains would be split. This hash war was just somewhat of a Civil War. Imagine that a certain faction within a country believes that the country’s government has misinterpreted the meaning of its constitution, leading to a society that doesn’t reflect what the nation’s founders envisioned. If the faction is adamant about living according to the founders’ original vision, they have a few options. [1] They could create a new country from scratch on a fresh piece of land, [2] they could try to secede from the country, [3] or they could try to convince the country to adopt what they deem as “correct”. The fork that created Bitcoin Cash is an instance of [2] while the one that created BSV is an instance of [3]. It is worth noting that BSV is ranked 6th in the top 100 cryptocurrencies by market capitalization.

Litecoin hard forked from Bitcoin in 2011 by a computer scientist Charles Lee. In technical details, it is nearly identical to Bitcoin with only one or two characteristics setting them apart. The first difference is that Litecoin has a block generation time of 2.5 minutes compared to Bitcoin’s 10 minutes. Another notable difference is the cryptographic algorithm they use – Litecoin uses Scrypt while Bitcoin uses SHA-256. Litecoin experienced massive growth which included a 100% leap within 24 hours in November 2013, just 2 years after its creation. And then 4 years later in 2017, Litecoin became the first of the top 5 (by market capitalization) cryptocurrencies to adopt Segregated Witness (SegWit) which we mentioned before. Today, Litecoin is among the largest cryptocurrencies by market capitalization (though still remaining far below that of Bitcoin) and currently has more than 50 million coins in circulation. 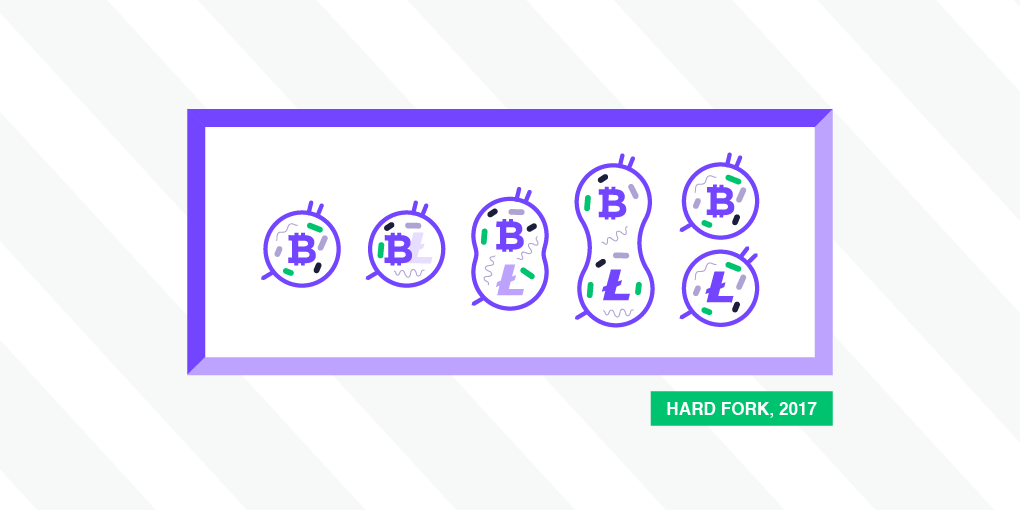 After a hard fork, two versions of a blockchain exist, the old and the new one. Users don’t necessarily have to upgrade, they can keep using the older version of a blockchain. Overall, hard forks are an unavoidable aspect of cryptocurrency at this point. Some have proved to be helpful, and the others have been scams. But then, we must respect the right of the community to develop such projects if we are to stay in-line with the principles of decentralization and open-source code; how Satoshi released the Bitcoin code. In the end, if we all endeavor to understand the principle of controversial hard forks, we should realize that it is really the community’s responsibility to audit itself. And that means this could be the vision that Satoshi ultimately had as he was building Bitcoin before he disappeared.